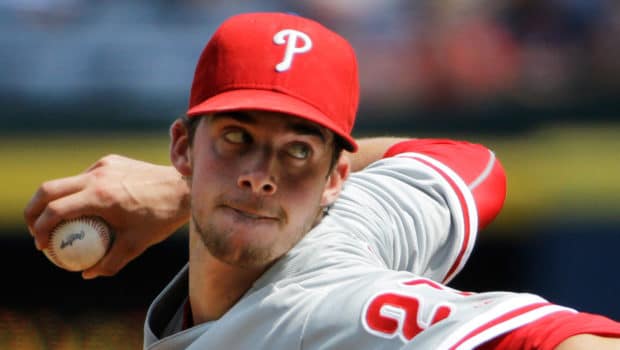 Look who made his first pitch in anger for the Phillies in seven months!

“It felt like forever,” Aaron Nola told MLB.com yesterday after he pitched two scoreless innings in an 8-8 tie against the Blue Jays. “I didn’t really know how long it was until I counted.”

Nola, 23, had not pitched since July 28 because of a low-grade sprain of his UCL and a low-grade strain of his flexor pronator tendon in his right elbow. But after a setback-free rehab in the offseason, he returned to the mound to make his Spring Training debut. He allowed one hit and struck out one, throwing 30 pitches.

Nola’s fastball hit 94 mph, although the radar gun in Dunedin can be fast. FanGraphs listed his average fastball at 90.3 mph last season.

Nevertheless, he said he felt fine, which is the most important thing for a pitcher the Phillies believe can accomplish great things when he is healthy. Nola went 5-4 with a 2.65 ERA in his first 12 starts last season, before finishing 1-5 with a 9.82 ERA in his final eight.

Nola said he appreciates the fact he is back on the mound again. Not everybody is so lucky, although the true test will be how he holds up over the course of the season.

Phillies manager Pete Mackanin said he will breathe easier with Nola once it is midseason and he is still pitching.

“I don’t foresee any [problems], but you never know,” Mackanin said. “I don’t know if the workload will catch up to him or not, and if it doesn’t, then we have a heck of a good pitcher there. But it’s always going to be an issue. I’m always going to wonder if he comes in one day and says [his arm is] bothering him. But right now, I’m staying positive and hoping he has no issues.”