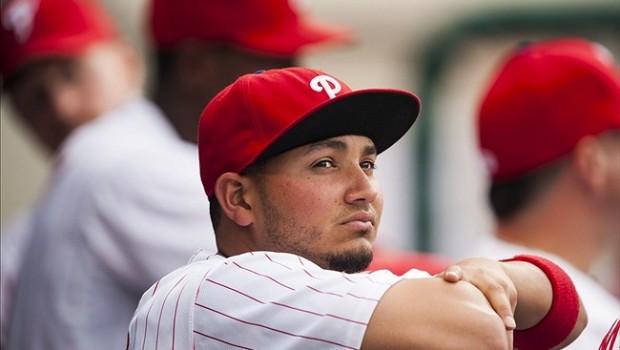 As hard as it may be to believe, there was something happening at the Philly sports complex Monday that didn’t involve Chip Kelly and the Eagles.

The Phillies’ 6-4 loss to the Pirates at Citizens Bank Park reminded everybody that Jimmy Rollins remains a productive shortstop without anybody in the organization ready to replace him.

He tripled and scored in the fourth inning before leaving the game with a strained left hamstring.

Rollins said he will have an ultrasound, but he expects to miss some time.

“Oh, there’s never a couple of days with hamstrings,” he said. “No matter if it’s a Grade 1 or what, you’re looking at 10 days. So, just going off of that, hopefully I can get back somewhere around Oakland [on Sept. 19]. Finish out then. Maybe before that. I’ll just set my eyes there. I’m not trying to do anything too strenuous.”

Rollins, who grew up an A’s fan in Alameda, Calif., went 1-for-2 on Monday to improve his batting average to .243 and his OPS to .717. Those might not seem like overly impressive numbers, but compare him to the rest of the shortstops in baseball and they put him among the top third.

He entered the night ranked ninth among 25 qualifying shortstops in OPS (.711). He also was tied for first in stolen bases (28), second in runs (75), fourth in home runs (16), seventh in total bases (202) and seventh in on-base percentage (.324). He continues to play solid shortstop on a team that needs all the good defense it can get.

Freddy Galvis (photo above) replaced Rollins in the fifth. He entered the night hitting .086 (5-for-58) with a career .212 batting average and a career .597 OPS. The Phillies considered him a possibility to replace Rollins as the everyday shortstop before they re-signed Rollins to a three-year, $33 million contract before the 2012 season. The deal included an $11 million option for 2015 that already vested based on plate appearances, which means Rollins is under contract to be the Phillies’ shortstop next season.

It seems likely he will, based on the fact the Phillies have no heir apparent –J.P. Crawford is at least a year away — and Rollins has indicated he has no desire to waive his full no-trade rights.

But it was Rollins who provided the Phillies’ only offensive highlight against Pirates left-hander Jeff Locke, who retired the first 10 batters he faced.

Not a single baseball left the infield until Rollins tripled into the right-field corner with one out in the fourth. Rollins grabbed at his left leg upon reaching third base, but he remained in the game. He made no attempt to score as Chase Utley grounded out for the second out, but found his way home when Ryan Howard singled to right to make it 1-0.

“Now, it’s sore,” Rollins said. “When it happened, I wasn’t sure if it was a cramp or a slight strain because it wasn’t very severe. As adrenaline wears down, it just gets a little more sore. It wasn’t anything serious. But they’ll have to pull me out of the game before I do something crazy.”

The Pirates took a 2-1 lead in the fifth inning when Starling Marte crushed a two-run home run to left-center field against Phillies right-hander Kyle Kendrick.

Kendrick started the eighth inning with 111 pitches and promptly allowed three hits before Sandberg pulled him at 118 pitches. All three runs scored to make it 5-1. Left-hander Jake Diekman allowed another run in the inning to make it 6-1.

Kendrick said he asked Sandberg to start the eighth.

“How about one more? If a guy gets on, take me out,” Kendrick said. “He agreed. … It didn’t work out. I don’t know if I’ll make that mistake again.”

Kendrick, who can become a free agent after this season, watched his ERA jump from 4.77 to 4.83 as a result.

The Phillies responded with three runs in the bottom of the eighth, but Marlon Byrd, who represented the go-ahead run, hit into an inning-ending forceout.