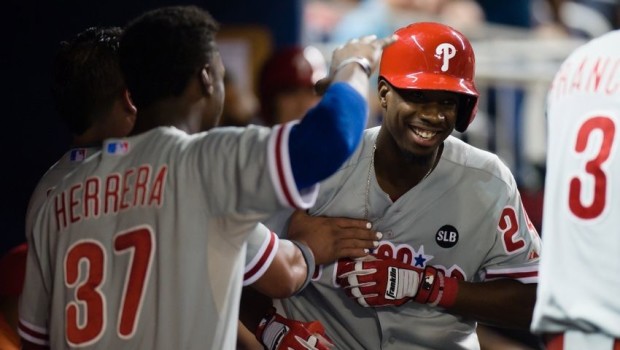 PHILLIES NEWBIES SWEENEY AND EICKHOFF ON DISPLAY AT HOME!

Now that the dust has cleared on a summer of trading, the Phillies are about the unwrap and show off what they received for Cole Hamels and Chase Utley.

Rookie right-hander Jerad Eickhoff, whom they acquired from Texas in the Hamels trade, starts Wednesday night against the first-place Mets. Rookie infielder/outfielder Darnell Sweeney, acquired from the Dodgers in the Utley deal, made his debut at Citizens Bank Park in Monday’s 16-7 loss to the Mets when he flew out in the 7th inning as a pinch-hitter (above).

“I like him,” Phillies interim manager Pete Mackanin said about Sweeney. “He looked like a sure-handed outfielder. He moves well. He went to the ball well. I was just talking to [bench coach] Larry Bowa and [hitting coach Steve] Henderson about the first time [Sweeney] took batting practice. The ball wasn’t coming off his bat in batting practice very well. He wasn’t really popping the ball. Then he hits that home run to left-center [at Marlins Park.]”

The ball traveled a projected 445 feet, according to Statcast™.

“He crushed it. That got rid of any doubts we might have had about his pop,” Mackanin said with a smile.

The Phillies’ farm system had been ranked near the bottom in baseball for years, but the prospects Phillies general manager Ruben Amaro Jr. and his staff acquired in the past month, along with strong Drafts the past two or three years, have jumped them to No. 7 in baseball, according to MLBPipeline.com.

Eickhoff and Sweeney are two of the reasons why.