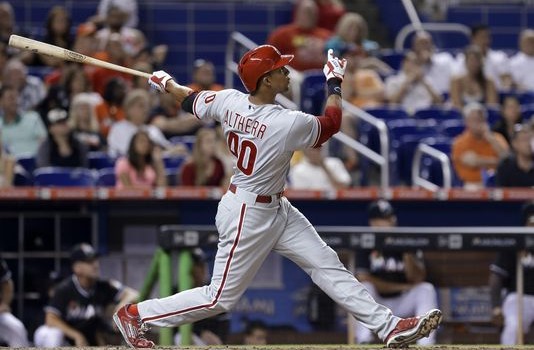 PHILLIES HAVE A NEW BIG BOPPER IN AARON ALTHERR!

If you are looking for a future star in the Post Apocalypse Phillies Era — after the trading of Jimmy Rollins, Cole Hamels and Chase Utley:

Altherr tripled to right field in the eighth inning of Friday night’s 7-1 victory over the Padres at Citizens Bank Park.

“I’m just trying to find a way to get the barrel on the ball and have good things happen,” Altherr said. “I’m just fortunate they’ve all gone for extra-base hits so far.”

Does he even recall the last time he singled?

“I don’t even remember to be honest with you,” he said with a smile.

It happened Aug. 16, when he played his last game with Triple-A Lehigh Valley. He singled twice against Pawtucket.

Of course, the singles will come. And who wouldn’t take doubles, triples and home runs? But Altherr certainly has been fun to watch since his arrival Aug. 18. Phillies interim manager Pete Mackanin said this week that Altherr will start to see more playing time the rest of the season, and why not?

“I’m looking forward to that challenge,” Altherr said. “I played every day in the Minor Leagues, so I’m ready for that. I’m just ready to be in there and show what I can do on a daily basis. It’s awesome [here]. It’s the big league life, you know? It’s everything you’ve ever dreamed of. Hopefully I can stay here for a while and keep doing well.”