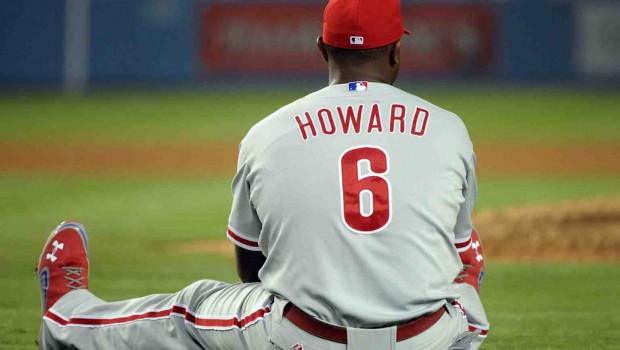 PHILLIES NEED TO PUT HOWARD OUT OF HIS MISERY AND CUT HIM!

In case Phillies fans haven’t noticed, legendary first baseman Ryan Howard is starting to resemble Babe Ruth in 1935, when the Boston Braves trotted him out as a drawing card even though he could barely swing and was an embarrassment.

And general manager Matt Klentak is going to have to make a big decision about cutting the Big Piece.

The question is just how much longer the Phillies bother not just playing Howard but keeping him on the roster.

As the Phillies continue exceeding expectations, the inevitability of a loyalty-vs.-pragmatism dogfight grows likewise, with Howard taking up one of 25 spots increasingly asinine.

On the season, Howard is hitting .161/.233/.381. If Howard qualified for the batting title, that would be the lowest batting average since the Deadball Era by 18 points. This is little more than the inevitable end to a five-year stretch in which Howard has hit .227/.295/.419 with 79 home runs and 289 RBIs in nearly 1,900 plate appearances. For the privilege of those plate appearances, Philly will have paid $125 million, including $25 million for his work this season, plus a $10 million buyout so they don’t need to suffer through another season of it.

Already, according to Baseball-Reference, Howard over the life of the extension has been worth minus-4 Wins Above Replacement. In other words, theoretically a Triple-A scrub would’ve packed more value than the all-power, low-on-base, bad-glove Howard. FanGraphs’ version of WAR is a bit kinder: minus-2. Which is to say the Phillies have eaten anywhere from $15 million to $30 million more in potential value on top of the $125 million they paid Howard.

What makes the deal so bad, beyond the numbers, was the pointlessness of the extension in the first place. In February 2009, Howard signed a three-year, $54 million contract with the Phillies that carried him through 2011 and his 32nd birthday – about the age at which teams start to worry about decline in big-bodied first-base/DH types. Fourteen months later, the Phillies tacked an additional five years on to Howard’s deal. They could’ve waited to see how his play slipped in 2010. They didn’t. They could’ve waited to see how he blew out his Achilles in 2011. They didn’t. And now, at 36, he’s got to be cut.