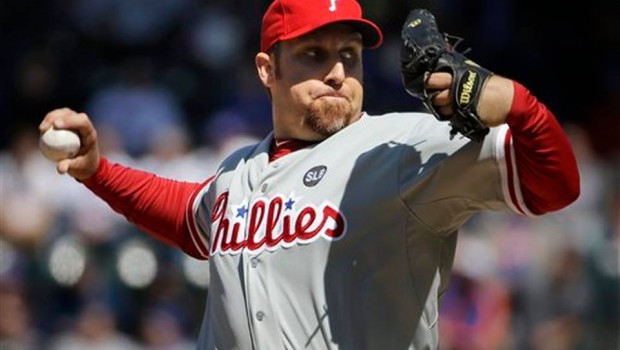 HARANG NEEDS TO RISE TO THE OCCASION AGAINST HIS OLD TEAM

Harang spent returns tonight for his first outing in Atlanta since joining the Phillies, and Turner Field could provide a comfortable environment as he attempts to bounce back from his worst start of the season.

However, he followed that up by allowing five runs and nine hits in six innings of Wednesday’s 5-2 loss in St. Louis.

Though Harang completed last season with the Braves with losses in his final four home starts, his 3.38 career ERA at Turner ranks third among the 12 ballparks at which he’s made at least 10 starts. He pitched seven innings in each of his last two outings at Atlanta, giving up three total runs.

Among Harang’s former teammates, Freddie Freeman (1 for 14 with five strikeouts) and Kelly Johnson (1 for 9) might be most unhappy about the reunion.

Harang will go up against Alex Wood for the second time in less than two weeks. Wood (1-1, 4.03) also didn’t get a decision April 24 after allowing five hits in 5 2-3 scoreless innings and like Harang, delivered his worst start to date in his next outing. The left-hander surrendered five runs in five innings of a 13-4 home loss to Washington on Wednesday.

“Mechanically and from a stuff standpoint, I feel that is the best I’ve been all spring,” Wood told MLB’s official website. “I was happy with the process, but I was pretty disappointed with the results.”

The Phillies scored more than five runs for the second time this season in Sunday’s 6-2 win at Miami, avoiding a three-game sweep and ending a five-game skid. Revere had his first three-hit contest and has batted .353 over his last nine after entering that stretch at .172. Ryan Howard was 2 for 4 with a triple and two RBIs.

“This is the kind of game you want to build off of,” said Howard, who homered in the last two games against Atlanta last month. “This is one that we definitely needed.”

The Phillies took two of three from the Braves from April 24-26 in Philly and won six of nine in Atlanta last year. However, they’ve dropped their last seven road series, going 6-18 in that stretch.

The Braves salvaged a four-game split with Cincinnati on Sunday, winning 5-0 as they head into the final three of a 10-game homestand.

Johnson homered for the second time in three games while Freeman went 2 for 4 to give him a .419 mark in the past eight contests.