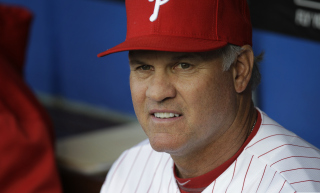 “We’ll take care of that,” Phillies manager Ryne Sandberg said before Saturday’s game at Nationals Park. “We’re going with the silent treatment at our place.

If you were under the impression that the Phillies-Nationals rivalry is on hold because Philly is in a down period and Washington is riding high:

It’s alive and well, and yesterday the Nats broke a boil with the pre-game music they pipe in during batting practice.

The Nationals have have been playing pop ballads during opposing teams’ batting practices this season, and the playlist has varied every day. But the past couple days the Phillies heard Patrick Swayze’s “She’s Like the Wind,” Starland Vocal Band’s “Afternoon Delight,” Anne Murray’s “You Needed Me,” Dan Hill’s “Can’t We Try,” and Spandau Ballet’s “True.”

“We’ll take care of that,” Phillies manager Ryne Sandberg told MLB.com before Saturday’s game against the Nationals at Nationals Park. “We’re going with the silent treatment at our place.

Some of the Phillies are amused at the tunes. Some could not care less. Others want mercy.

“I don’t think there’s any malice behind it,” Phillies right-hander Justin De Fratus said. “I think it’s funny. They played that ‘Fievel Goes West’ song yesterday. If anything, it’s a change of pace from some of the stuff we hear every day.”

“I mean, come on,” Jeff Francoeur said. “If you did it one time it’s funny. But we come here so many times.”

The Phillies actually had a bigger beef than the music.

“It’s very inconvenient,” Sandberg said. “That will be another adjustment. That seed was planted about six weeks ago.”

“I didn’t even notice it,” Nationals outfielder Jayson Werth said with a hint of a smile. “But it’s nice soothing music they’ve got going on here. It’s nice for the fans at the ballpark before the game. Yeah, maybe get a beer, a pretzel, enjoy BP.”