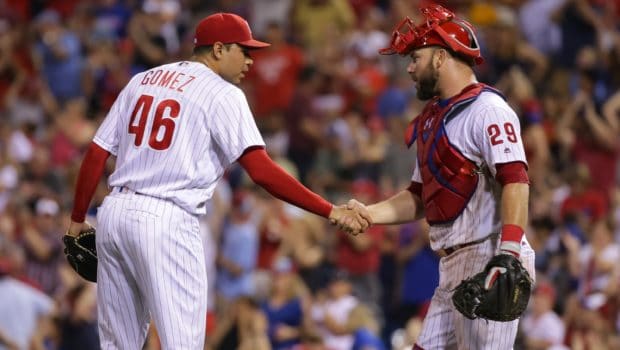 PHILLIES MAY BE CLOSING THE BOOK ON JEANMAR GOMEZ

Phillies reliever Jeanmar Gomez transformed himself from a relatively anonymous middle reliever into a closer with 30-plus saves.

But after he blew his sixth save of the season in the ninth inning last night in a 9-8 loss in 11 innings to the Mets at Citi Field, one wonders how much longer he will be in that role, whether it be this season or next.

Opponents have hit .391 against him.

Phillies manager Pete Mackanin said Wednesday that he would consider using another pitcher in the ninth inning in a save situation, but then offered Thursday afternoon that he would stick with Gomez because he wanted him to finish the season on a positive note.

If Mackanin changes his mind, Hector Neris is the most likely candidate to take Gomez’s place. Edubray Ramos is considered a closer-in-the-making, but he has less experience than Neris. Ramos served up the game-winning three-run home run to Asdrubal Cabrera in the 11th on Thursday.

“It’s really tough,” shortstop Freddy Galvis said of Gomez’s struggles. “Really tough. He’s been good for us the last five months. He’s been doing a pretty good job for us. He’s had a hard time the last couple weeks. There’s nothing we can say to him. He carried us for five months. He was doing a pretty good job. It’s hard to see one of your guys get into that situation. I think he’s going to turn himself around and do his best like he always does. He has to get back his confidence and make his pitch.”

Gomez obviously hopes he gets another opportunity to redeem himself.

“For me when I come to the ballpark I try to forget about the last day,” he said. “Tomorrow is a new day.”