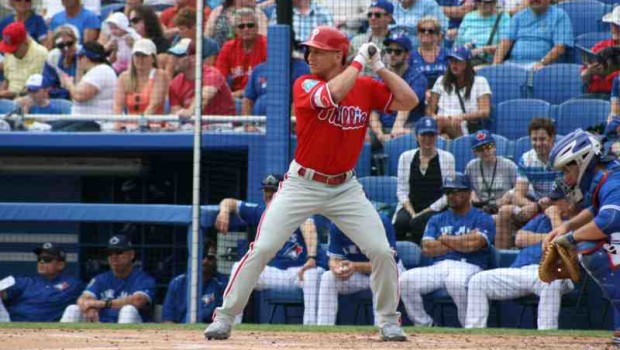 Everybody will talk about the home run David Lough hit in the third inning of yesterday’s 8-5 win over the Blue Jays at Bright House Field.

Everybody loves the long ball.

But what caught manager Pete Mackanin’s eye was what Lough did in the fifth, when the 30-year-old non-roster outfielder reached on an infield single with one out, stole second, went to third on a fly ball and eventually scored on a base hit by Odubel Herrera.

“We’re not the Toronto Blue Jays who can just sit and wait because they’ve got five or six guys who can hit home runs,” Mackanin said. “And when you’re not hitting home runs or you’re facing a tough pitcher, a little bunt for a base hit, get ’em over, get ’em in, manufacturing runs can help you win a game, as well as defense.”

The signing of Lough, who spent the last two years with the Orioles before signing a Minor League deal with the Phillies just weeks before Spring Training opened, didn’t attract a lot of attention. But he’s not conceding anything.

“It might be a Minor League deal on paper but, in my mind, I’m coming in expecting to win a job,” he said. “I have high expectations for myself. I kind of took a back seat the last couple years in Baltimore. But I say one step back, two steps forward. I worked really hard this offseason to try to get my swing where it is. My defense has always been there. So I’m trying to just put some wood on the ball and make this ballclub.”

“Lough is a solid extra outfielder,” Mackanin said. “He knows how to play the game: He can steal a base, solid defender, good situational hitter. I like him a lot. We’re going to have tough decisions to make with all these guys. Not just the pitching staff but the extra players we’re going to keep.”

One thought on “PHILLIES’ LOUGH CAN PLAY LONG BALL AND SMALL BALL!”