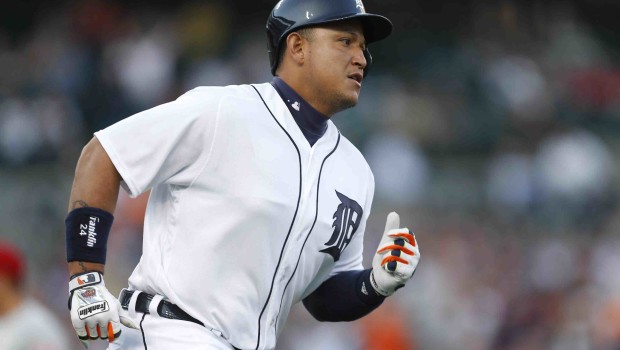 The results are in:

The Phillies cannot win games by resorting to power.

Of which they have very little!

On a night when the Tigers and Phillies combined for six solo home runs, two of them from Miguel Cabrera (above), Detroit pulled ahead on a Victor Martinez seventh-inning single that scored Cabrera for a 5-4 victory last night at Comerica Park.

Cabrera’s second two-homer game in four days included an opposite-field loft in the third inning and a drive to left in the fifth, both of which tied the game. Both came off Phillies starter Vince Velasquez, who gave up as many home runs in four-plus innings (three) as he had all season entering the night.

“He’s a great pitcher,” said J.D. Martinez, who went back-to-back with Cabrera in the fifth. “I think it was, in a way, bad timing for him, because he came in here, we’re hitting, and we just faced [the Rays’ Chris] Archer and [Matt] Andriese. We’ve faced a lot of similar pitchers to him. So I think it was just a rough time for him to come in here.”

Velasquez said he did not do a good job of using his secondary pitches, which allowed Tigers hitters to take him deep. He also said he needed to challenge hitters inside more effectively.

“You can’t pitch around it, even if your secondary pitches aren’t working,” Velasquez said. “You can use it to protect your fastball, but you’ve got to pitch inside to challenge hitters.”

Cabrera’s double to right-center off Colton Murray (0-1) in the seventh stayed in the park, but put him in scoring position for Martinez, who lined a single into right field.