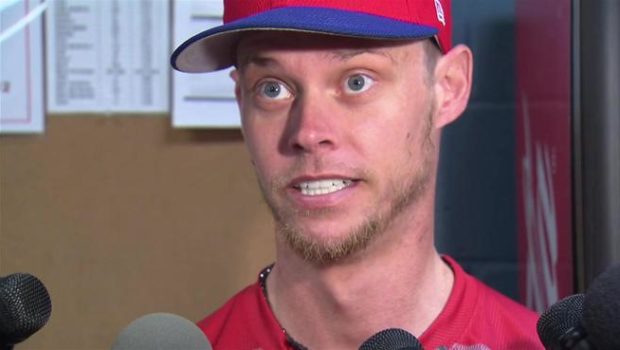 Clay Buchholz is a happy camper!

“I think it energizes anybody,” Buchholz told MLB.com yesterday of the trade that sent him from the Red Sox to the Phillies. “There are expectations that are brought back to you. That sense of complacency, being in one spot for an extended period of time, that’s gone. And yeah, you want to perform for the new faces and show that you’re still good at your craft and good at what you do.”

Buchholz, 32, spent 10 seasons with the Red Sox, but he became expendable once they acquired Chris Sale in a trade with the White Sox. So Boston shipped Buchholz to Philly for second-base prospect Josh Tobias.

But why would the rebuilding Phillies want Buchholz, who will be paid $13.5 million and become a free agent following the season? In short, because they can afford the salary and because almost everybody can use more starting pitching.

MLB.com crunched the numbers in 2016 and found that the average team used 10.3 starters in a season since the league expanded to 30 teams in 1998. In that period, 136 teams had one or fewer starters make 30-plus starts, while only six teams received 30-plus starts from five starters.

So while the Phillies already had Jeremy Hellickson, Jerad Eickhoff, Vince Velasquez, Aaron Nola, Jake Thompson, Zach Eflin, Alec Asher, Ben Lively,Adam Morgan, Nick Pivetta and others in the organization, the odds are slim that everybody will stay healthy and/or pitch effectively. Buchholz gives the Phillies another arm in their arsenal.

The Phillies are rolling the dice a bit on Buchholz, too. If he pitches well, the Phillies theoretically could trade him to a contender before the July 31 non-waiver trade deadline, if the Phillies are not in contention. And if Buchholz struggles, well, the Phillies won’t feel obligated to keep him pitching because they have not made a long-term commitment to him. There’s almost no downside to it.

But the Phillies think Buchholz figured out something late in the 2016 season with the Red Sox. Buchholz went 8-10 with a 4.78 ERA this past year. He posted a 6.35 ERA in his first 10 starts before moving to Boston’s bullpen. He tweaked his mechanics, changing his release point and pitching exclusively out of the stretch. He then finished the season in the Red Sox’s rotation, going 3-0 with a 3.14 ERA in five September starts.

The Phillies hope they get the September version of Buchholz.

“I think the stretch helped him out a lot,” said catcher Bryan Holaday, who caught Buchholz in 2016 with the Red Sox and is in camp with the Phillies as a non-roster invitee. “It just simplified everything and allowed him to repeat his mechanics better. He didn’t have to worry about the timing of his windup and all that stuff. It got him into a better position, and he could mess with the hitters’ timing a little bit with holding the ball.”

“I’m coming into camp right now thinking I’m going to stay in the stretch,” Buchholz said. “It worked out good for me.”

Buchholz hopes 2017 works out well for him, too — even if he moved from a team with World Series aspirations to a team that hopes to contend in a year or two.

“I look at it as an opportunity to prove people wrong,” he said. “There’s a lot of young guys on this team that I’ve been playing against for a a couple of years, and a handful I’ve been playing against for a while. That’s part of baseball. Not every team can be picked to win a World Series every year. That’d be too easy. I think everybody can look at it as a challenge and try to prove people wrong and go as far as we can.”