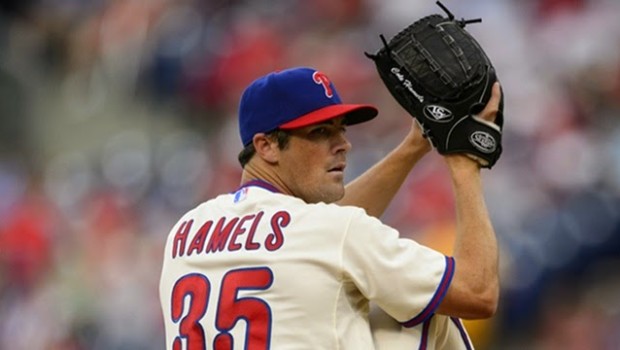 PHILLIES LOOKING FOR ‘HUGE PACKAGE’ IN A TRADE FOR COLE HAMELS

One executive with another team suggested the Padres may be more likely than some others to land Hamels, based on their decent prospect list and obvious resolve to contend in 2015.

Yet another rival exec suggested the Phillies are looking for a “huge” package in return for Hamels, to the point where that exec questioned whether Philly is committed to trading Hamels as they are telling teams they are.

Fresh off a trio of bold impact moves to rework their entire outfield and the middle of their lineup, the aggressive Padres are still said to be alive for another potential blockbuster, this one involving Hamels — although, others teams also are in the mix.

The likeliest scenario, according to CBSSports.com’s Jon Heyman, would have San Diego sending a prospect package to Philly. The Padres have managed to keep most of their highest rated prospects even after all their many trades, with the top trio of outfielder Hunter Renfroe, pitcher Matt Wisler and catcher Austin Hedges seemingly on everyone’s wish list.

The Red Sox, Cubs and Cardinals are among other teams tied to interest in Hamels, who is Philly’s big trade piece as an unquestioned ace with a contract that expires quite reasonably in four years.

Though Hamels’ $144-million, six-year contract pays market rate of $24 million on average, the limited length (four years remaining, and $96 million total) makes Hamels extra attractive, especially compared to all the other veterans the Phillies have considered trading this winter, many of whom are overpriced and/or have unpalatable options.

It also isn’t known whether or how much the Phillies may be willing to pay down Hamels’ deal, though that may depend upon the quality of the return package. The Padres got the rival Dodgers to pay down $32 million of the $107 million remaining on Kemp’s deal, though it’s fair to say Kemp has had more injuries than Hamels, and also a spottier track record.

Hamels, 31, was 9-9 but with a 2.46 ERA for the Phillies last year. The Padres are one of only eight teams to which he can be traded without his consent, and he’s believed to be interested in going to a contender, anyway. The longer the winter goes, the more the Padres look like a contender.