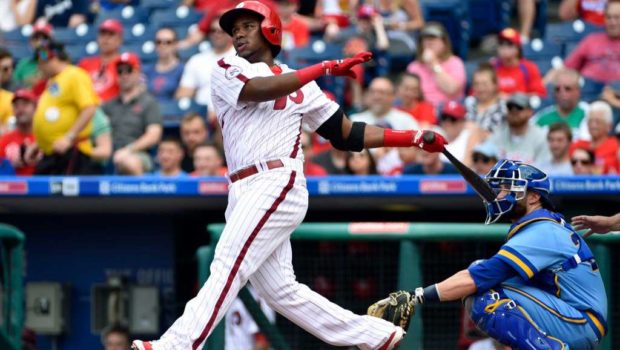 All of a sudden, the Phillies broke out their bats and acted as if hitting were a part of their arsenal.

There was so much production up and down the lineup card in yesterday’s 8-1 blow-out of the Brewers that manager Pete Mackanin had to bring a cheat sheet to the podium for his post-game news conference.

“So I wouldn’t forget anybody,” Mackanin joked.

There were home runs from Cameron Rupp, Jimmy Paredes and Maikel Franco (above). He praised Odubel Herrera’s 4-for-5 day — the second four-hit game of his career. He also didn’t forget Tommy Joseph’s near-home run.

After intentionally walking Franco to get to Joseph in the fifth inning, the 24-year-old first baseman put a 1-2 fastball from Brewers starter Wily Peralta over the right field wall. But it wasn’t all his doing. Replay showed a fan reaching over the wall, negating the homer and putting Joseph at second and Herrera across the plate, with the first of five runs the Phillies scored in the frame.

No review was necessary to determine if Paredes had left the yard four pitches later. His mammoth shot to right landed nearly 20 rows back. The three-run homer blew the game open, but Rupp wanted to leave his mark, as well. He put a 93-mph fastball over the left-field wall for an even more monstrous blast, giving the Phillies their fifth run of the inning and eighth of the game.

“We know we can do that, and we showed it,” Rupp said. “Now we just have to be consistent with it. The bats are there. Hitting’s contagious.”

The only position player who started yesterday’s game to not get a hit was Freddy Galvis, but even he contributed to the onslaught.

“Freddy didn’t get any hits, but in the first inning, he got that run in from third base, then he bunted that guy to third,” Mackanin said. “Those little things lead to runs, and I just wanted to give him a shout out for that.”

It was the first time the Phillies had hit back-to-back bombs since Aug. 22, 2015, when Aaron Altherr and Darin Ruf did so in a 4-2 win over the Marlins. The five runs in the fifth were the most the Phillies had scored in an inning all season, and the eight total are tied for the second-highest output.

The 1976 squad ranked second in baseball — behind only Cincinnati’s Big Red Machine — with 4.75 runs per game. The 2016 version has had a harder time coming up with offense. By scoring five runs in the fifth, they outscored their full-game output for 45 of the Phillies’ 54 games.

Mackanin said he would like to establish a consistent lineup, or at least middle of the order. Consistency would help spread the already contagious offense. Back on the 1976 team, of their 162 games, Schmidt hit third in 139 of them and Luzinski fourth in 143. Eight different players have already split time in the two spots on the 2016 squad.