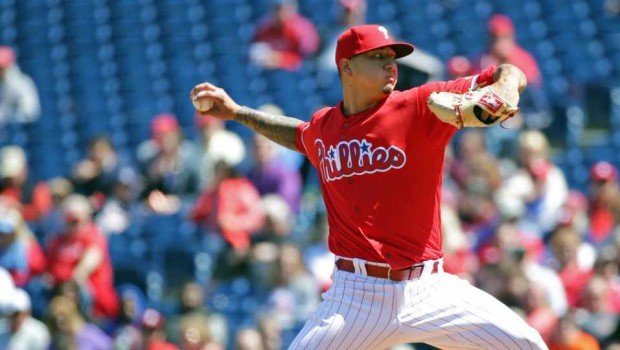 Vince Velasquez is no flash in the pan!

The Phillies right-hander pitched six scoreless innings yesterday in a 2-1 victory over the Indians at Citizens Bank Park. Freddy Galvis singled to score a run in the third, while Indians pitcher Danny Salazar balked in the Phillies’ second run.

The Phillies swept the series, extending their winning streak to six games. It is the first time the Phillies (15-10) have swept back-to-back series since Sept. 7-12, 2012, when they swept the Rockies and Marlins.

“For us to do what we’re doing right now, we’re surprising a lot of people and I think that’s what we expected coming in from spring training from Day 1,” Phillies catcher Cameron Rupp said.

Salazar pitched well, but the Indians offered no help until Carlos Santana hit a solo homer in the ninth against Hector Neris, who earned the first save of his career. Salazar allowed three hits, two runs and struck out eight in seven innings.

“It was incredible, man,” Neris said of earning the save. “They gave me the opportunity and I’m trying to do well for my team and myself. I’m doing something to help my team win. When I can do that, it’s good. When you can do that you can be happy.” More >

Velasquez, who was the key piece in the Ken Giles trade with Houston in December, walked two consecutive batters to start the fourth inning before having the Phillies’ grounds crew repair a wet mound. He cruised from there, retiring the final nine batters he faced. He allowed just two hits, four walks and struck out six in scoreless innings, making this the third time in five starts he has not allowed a run. He threw 103 pitches, otherwise he might have pitched longer.