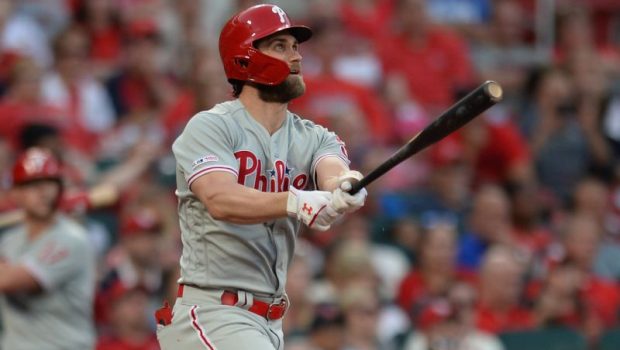 The Phils have left Atlanta iN tatters.

Their once-solid three-game lead in the NL East is in the rear-view after the Braves waxed them 15-1 yesterday, dropping them 2 1/2 games into second place.

So, they are limping into Washington tonight.

“Obviously we all know who we are playing. They are ahead of us,” Nats manager Dave Martinez said of the Phillies.

Bryce Harper (above), who signed as a free agent with the Phils, will make his second trip back to DC.

He was 5-for-7 in two games at Washington in April, with a double, homer and three RBIs. The starting pitchers for the first of four games: Jake Arrieta (6-5, 4.31) of the Phillies against Patrick Corbin (5-5, 4.11) of Washington.

“We know we have a tough series,” said Nationals starting pitcher Anibal Sanchez, who won his 100th career game Sunday.

He has lasted just 71 innings in those starts — just over 5.0 per outing — and has not beaten the Nationals since 2015.

Corbin has struggled in his last three starts after he signed with Washington prior to this season.

The Washington offense has been on fire, as Howie Kendrick, Anthony Rendon and Adam Eaton each had three hits Sunday. Rendon and Suzuki also homered, with Rendon going deep for the 16th time and lifting his average to .321.

Adams hit the second grand slam of his career Sunday, while Eaton reached base in all five of his trips to the plate.

Rendon was the third Washington player to go deep Sunday against reliever Zack Godley. Rendon, who is making a bid for his first All-Star appearance, is batting .340 this month with six homers.

New Phillie Jay Bruce has been dealing with hamstring issues after he had to leave Saturday’s game with the Braves.

“I got to the point where, I felt like if I did try, I thought I might actually injure it instead of it just being tight,” Bruce told MLB.com Saturday. “Kind of take tomorrow and we’ll see, but I don’t anticipate it being longer than a day or two.”