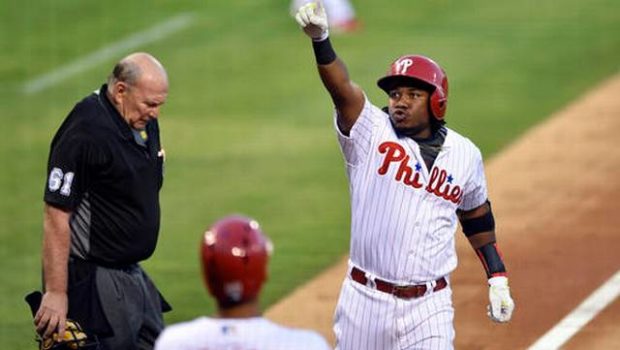 Okay, it’s only March 30, with the real season opener four days away in Cincy.

And, yes, Mike Schmidt is not just a Hall of Famer but an employee as a broadcaster for the Phillies.

“If I was mentoring Maikel Franco right now, I would say, ‘Son, we’re going to be the MVP. And nothing is going to stop us but an injury,'” Schmidt told MLB.com.

Franco hit .255 with 25 home runs, 88 RBIs and a .733 OPS in his age-23 season last year. Those numbers ranked toward the bottom of everyday third basemen, much less all everyday players.

“I was disappointed. I had a lot higher expectations for Maikel,” Schmidt said.

“The area that he has to develop better is game-planning at home plate and understanding there is a guy in the batter’s box behind him, and that a walk with men on second and third is a possibility,” Schmidt said. “His desire to drive in those two runs or getting three with a home-run swing leads to those at-bats where you give an at-bat away, because you don’t have the right game plan.

“It’s not mechanics and it’s not physical. It’s [about] not wasting an at-bat starting your swing before the pitcher lets go of the ball because you are overanxious. The overanxious part of hitting is one of those areas where [Franco] has to improve. For me, it was a major problem early, so that’s why I can relate to him so much.”