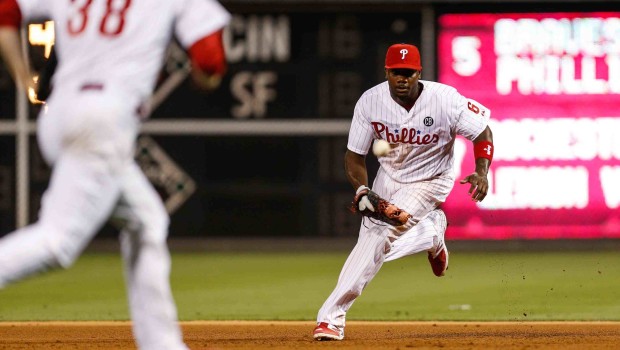 The question is, “Does Ruben Amaro listen.”

The Phillies feckless general manager said in December that the Phillies would be “better for the organization not with Ryan Howard (photo above) but without him.”

Now Schmidt, the legendary Phillies third baseman and Hall of Famer, has weighed in:

“Ryan is going to be kind of like me at the end of my career,” Schmidt said Thursday in an interview with Mike Missanelli on 97.5 FM The Fanatic . “There was myself in the late ’80s. There was Von Hayes. And there were a bunch of young kids who were just trying to learn how to play the game and compete in the major leagues. I really needed to be a DH on a contending team. That’s where I really needed to be. No one said that to me.

“I think that was more of the essence of what Ruben was trying to say. We are falling into a rebuilding position for a couple of years now. It might be better for everyone if Ryan Howard were somewhere hitting 30-35 home runs and driving in 100-110 runs for a contending team. Basically, that’s it.”

Amaro and the Phillies have made no secret of the club’s desire to move Howard this winter, especially given the minimum of $60 million that remains on his deal combined with his rapidly diminishing skill-set.

However, outside of a minor miracle or Amaro simply giving Howard away before spring training begins, it appears likely that the 35-year-old first baseman will be in Clearwater as camp opens.

“If Ryan cannot be moved somewhere, Schmidt said. “If something can’t be worked out, he’ll come back to our ballclub. He’s got a lot of friends here. He has Charlie Manuel here. He’s had some tremendous years with Charlie Manuel and come to spring training in shape, get over to play first base and be on the all-star game in mid-season and everyone will have egg on their face. That would be great.”