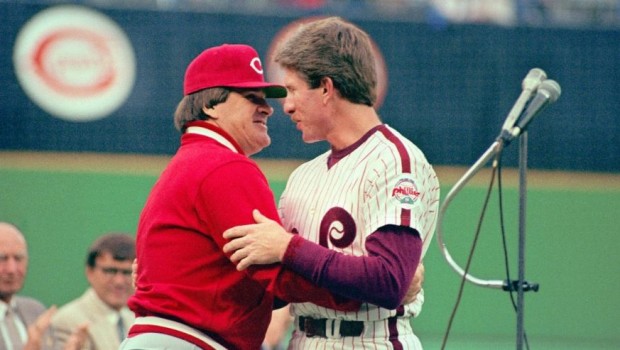 He tried coaching Pete Rose on what to say and how to act, talked to MLB officials on Rose’s behalf and publicly stood by baseball’s hit king, who was a teammate from 1979-83.

MLB commissioner Rob Manfred yesterday denied Rose’s appeal, and it pained Schmidt because he knows Rose, banned in 1989 for betting on baseball while playing for and managing the Cincinnati Reds, is hurting.

“My heart’s pounding here now with this information,” Schmidt said during a call-in interview on the MLB Network.

Schmidt guessed that Rose, 74, will struggle with the decision, which practically ensures that he’ll never work in baseball again or become a Hall of Famer.

“I’m not sure how emotional Pete will get about this as he gets older or life in general,” Schmidt said. “Pete always has seemed to be a rough, tough guy that really wasn’t emotional. You saw when he got that (record-breaking) hit … and it was hard for him to cry. He’s a man’s man.

“I think the day will come when Pete will look back on this … Throughout this whole thing, I think he always kind of senses or feels like he’s bigger than it all, and at some point in his life he’ll sit back in a rocking chair and realize he wasn’t or isn’t bigger than baseball.” Now a weekend Phillies television analyst, Schmidt didn’t criticize Manfred’s decision. He understands, but still was rooting for his friend.

“This thing has a lot of tentacles. … The sign inside the locker room door that says. ‘You’re banned for life if you’re found to bet on the sport’ … That’s a very, very powerful issue, one that we all see on the locker room wall and one that Pete Rose as an example now has magnified. And I don’t think anyone will attempt that going forward based on what has happened in Pete Rose’s life.

“One of the other tentacles, of course, that a lot of people want to attack and talk about is if guys who are associated with or have admitted to use of PEDs are in baseball now making a living in quite strong positions in the game. … what is different than what has happened to Pete Rose. Everyone in America seems to be given a second chance when they admit to doing wrong.”

‘It’s not the answer that Pete wanted,’ Schmidt said. “We all have an opinion of why it came as it did, but I think it’s good that the commissioner’s office finally acted on Pete’s behalf and he can get along with his life now.”