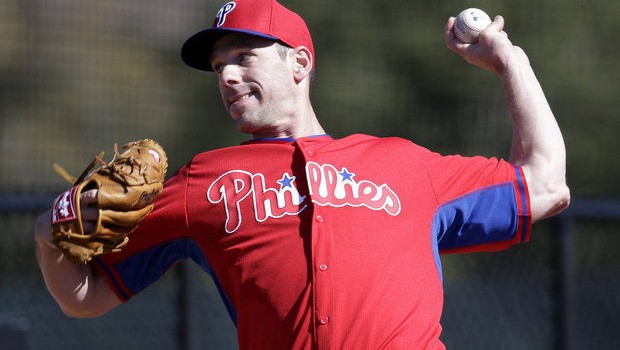 PHILLIES’ LEE TO THROW THROUGH THE ELBOW PAIN

Even the most renowned orthopedic surgeon in America couldn’t be definitive about the medical status of Phillies’ lefty Cliff Lee.

After Dr. James Andrews reviewed the MRI of Lee’s left elbow, he agrees with the team’s prognosis of allowing the 36-year-old to pitch through pain but did not take surgery off the table completely during a press conference Tuesday.

According to Andrews, Lee has a tear in his common flexor tendon, he told reporters today in Clearwater that while surgery hasn’t been ruled out, Lee would not require Tommy John surgery and the timetable for a return would be 6-8 months.

“We’re not terribly optimistic,” Phillies general manager Ruben Amaro Jr. told reporters about Lee’s prognosis. “But there is still a possibility he can come back and throw with a minimal amount of discomfort.”

Prior to Tuesday’s game against the Detroit Tigers, Lee went through a throwing routine and depending on how the rest of this week goes, could still make his next start in Grapefruit League action.

“We’ve tried to do this, rehab him non-surgically twice now, and the next order of progression, I guess, would be to have a surgery if it doesn’t pan out,” Amaro said per Jake Kaplan of the Inquirer. “Or at least that would be I think the suggestion from the doctors. Again, we’re not to that point yet because we have to wait and see how he does with his throwing progression moving forward.”

Lee made his first start of the spring last Thursday and threw two scoreless innings. He said on Friday during his normal routine he started to experience soreness. The Phillies shut Lee down for the season on July 31 last year because of a flexor pronator strain in his left elbow.

“He’s just going to continue to throw and if it gets worse and worse then he might have to shut it down,” Amaro said. “We’ll figure out where we go from there.”