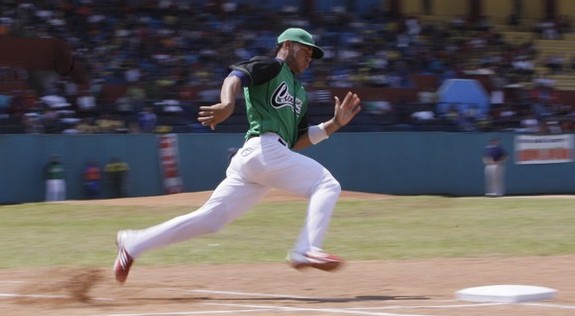 PHILLIES ARE LATECOMERS TO THE MANCADO SIGNING CROWD

The Phillies are late to the Yoan Moncado signing party, and already general manager Ruben Amaro Jr. is lowering expectations.

The Phillies are one of the many teams that has the Cuban infirlder on their radar. However, Amaro Jr. wouldn’t divulge how much interest the team has in the promising Cuban prospect.

“We know him well,” Amaro Jr. said Thursday, per MLB.com. “He’s a very good prospect. He has a chance to be a very good player. He checks off a lot of the boxes, but we’re not the only team that would be interested in Yoan Moncada. But that’s all I can say.”

The Phillies do face some hurdles in trying to sign the 19-year-old prospect. Moncada is under 23 and has not played five years in the Cuban professional league, so a team will pay a 100 percent penalty to sign him, if it exceeds its annual international bonus allotment. The Phillies are less than $100,000 under their $3,221,800 cap for the 2014-15 international signing period, which ends June 15.

Also, if an MLB team exceeds its international budget by 15 percent, then it is prohibited from spending more than $300,000 on any international player for the next two signing periods.

“It is clear that those penalties are significant,” Amaro said. “That is part of the process.”

One thought on “PHILLIES ARE LATECOMERS TO THE MANCADO SIGNING CROWD”