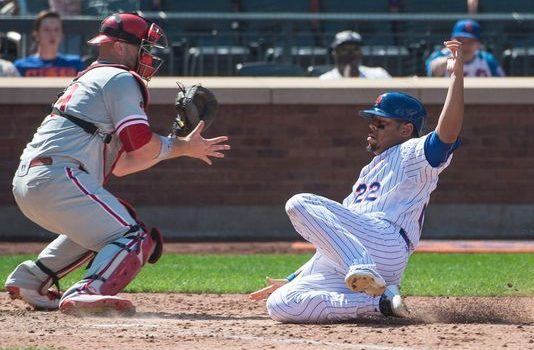 PHILLIES LABOR IN LOSING 11-7 TO THE METS!

Jose Reyes homered, drew two walks and sped from first to third on an infield out during an 11-7 win over the Phillies.

Asdrubal Cabrera homered to back Rafael Montero, who won his second straight start.

The Mets chased Mark Leiter Jr. (2-5) by sending 11 batters to the plate during a six-run fourth.

Reyes extended his hitting streak to 10 games with his 10th homer of the season to lighten up the mood on a team that has been beset by one injury after another over the last couple of weeks.

Ahead 4-0, the Mets broke it open in the fourth. Gavin Cecchini hit a two-run single and after a fielding error by shortstop Freddy Galvis on a bunt by Montero, Reyes — who started at shortstop in place of Amed Rosario — had a RBI single.

Nori Aoki drove in another run with a grounder and Reyes took advantage of the Phillies defense by advancing to third before reliever Kevin Siegrist’s wild pitch let him score.

Montero left after the Phillies loaded the bases with one out in the sixth. Reliever Paul Sewald threw a wild pitch that let a run score, then Hyun-Soo Kim hit a two-run double and pinch-hitter Andres Blanco had an RBI single that made it 10-5.