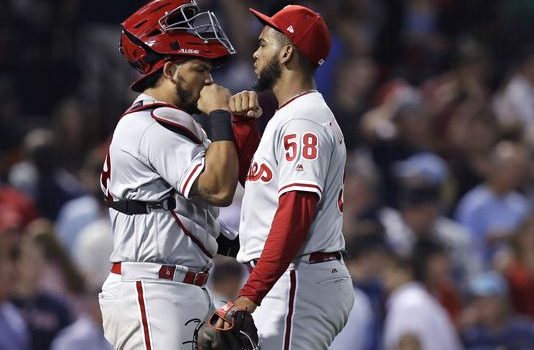 The NL East-leading Phillies got out of Boston with a split with the MLB-best Red Sox.

Arrieta tossed seven innings of one-run ball and the Phillies beat the Red Sox, 3-1, to split the two-game series.

Pomeranz was getting hit hard by the Phillies, but a lot of the line drives found gloves, and he avoided giving up any homers while throwing 95 pitches, 50 for strikes.

His command was off, as he walked four and hit two batters, but the results were an improvement from his first start off the disabled list last week, when he gave up four runs in four-plus innings.

The Sox were down 2-0 until the sixth, when Blake Swihart hit a leadoff single and J.D. Martinez doubled off the wall to put runners at the corners with one out. Xander Bogaerts knocked in a run with a groundout to third base, and newcomer Ian Kinsler nearly tied the game with a line drive to right, but it was hit just hard enough for Nick Williams to haul it in and end the inning.

Bogaerts took a pitch off the right hand/wrist area in the ninth but stayed in the game. A similar hit by pitch played a big role in his late-season collapse in 2017.

The Sox had two runners on with nobody out in the ninth, but Kinsler struck out and Mookie Betts, who did not start one night after going 0-for-5 for the first time since May 15, flew out in a pinch-hitting appearance. Brock Holt struck out to end the game.

Swihart had a strong game behind the plate, where he blocked two balls in the dirt and threw out an attempted base-stealer. Opposing runners are 2-for-4 against him this season.