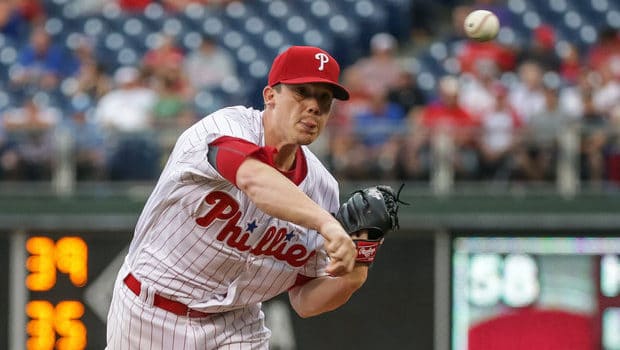 The first seven innings of the Phillies’ 4-3 win over the Braves belonged to Jeremy Hellickson, who surrendered just three hits and two runs.

It was the eighth time he has pitched seven innings while allowing two or fewer runs since joining the Phillies last season, the most on the team.

Any solid start from Hellickson is beneficial for the Phillies, who could try to deal Hellickson for the second consecutive season if they find themselves out of playoff contention come the non-waiver trade deadline.

The secret to his success is simple.

Hellickson relies on fastball command down in the zone and a disappearing changeup that looks like a low fastball until it’s too late to differentiate. This induces lots of weak contact, like last night, when hitters were 1-for-8 against the changeup.

“I probably wouldn’t be here without a changeup,” Hellickson told MLB.com. “I think it’s working because my fastball is down and I’m commanding that where I want.”

He’s throwing his changeup 34 percent of the time in 2017, nine percent more than last season, according to Statcast™. That difference has come from fewer four-seamers and curveballs thrown. The change is working for Hellickson, whose ERA now sits at 1.88 through four starts.

“A lot of it has to do with feel,” Philies manager Pete Mackanin said on why Hellickson began throwing the pitch more after the All-Star break last season. “He got that feel and it gave him confidence.”

Before the All-Star break in 2016, Hellickson threw more curveballs than changeups in a start six times. Since then, just once.

That Hellickson doesn’t have the most electric stuff and still manages to get outs with ease is frustrating for his opponents.

“He doesn’t overpower you,” said Braves first baseman Freddie Freeman. “But he keeps you off-balance pretty much the whole time. It’s a fastball and changeup. … It’s frustrating.”