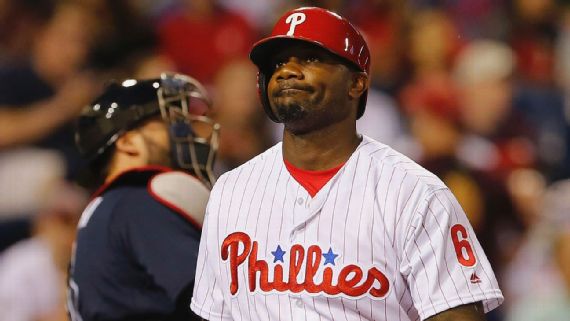 Ryan Howard was a scratch last night before the Phillies’ 8-0 win over the Marlins because of swelling in his left knee.

Howard said before the game that he has “a little bit” of fluid in the knee. He underwent surgery on it in July 2013, forcing him to miss the rest of the season, and he had the knee drained last September, which cost him the final couple of weeks.

Asked if he could play this afternoon in the series finale, Howard said, “We’ll see.”

The Phillies have six games remaining at Citizens Bank Park. Phillies general manager Matt Klentak said earlier this week that the Phillies will honor Howard’s many accomplishments in some fashion. Howard is in the final season of a five-year, $125 million contract. The team has a $23 million club option for 2017, but they are certain to take a $10 million buyout instead.

“We are not going to formally announce anything before the end of the season,” Klentak said. “It would be irresponsible and premature. But I think Phillies fans are smart and they generally understand what’s going on. And as we’ve seen the second half play out — you guys have seen a lot of it — the fans are recognizing that this is getting closer to the end, and they want to express their appreciation for what Ryan has meant to this franchise. My hope is that in the final homestand — those three games against the Mets — we would be able to do something that Ryan would be able to get the proper end of a season that he deserves.”

Coincidentally, before Howard got scratched, Phillies manager Pete Mackanin wondered if Howard’s part-time role at first base has helped his production by keeping him fresh. Howard is averaging a home run every 13.89 at-bats this season. It marks his best home run rate since 2009 (13.69).

“I’m sure he’s probably thinking if he had played more he’d have 30-something [home runs],” Mackanin said. “But with age, it’s probably kept him healthier than he probably would have been. He’s contributed pretty well in the second half. He has played so much. He doesn’t miss a lot of games. It wears and tears on you.”