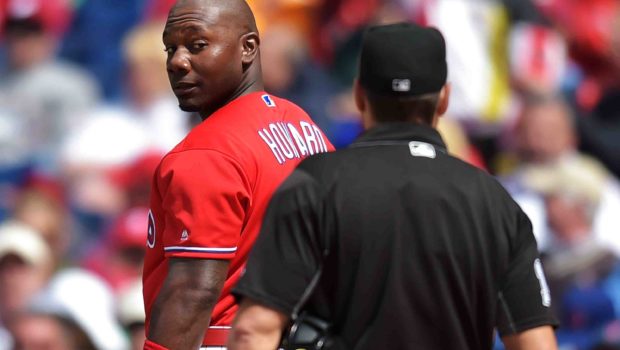 PHILLIES’ HOWARD GIVES MACKANIN A PIECE OF HIS MIND!

Ryan Howard and Phillies manager Pete Mackanin had a sit-down and everything is A-OK!

They felt the need to clear the air in a meeting before an 8-4 loss to the Braves. Howard then went 2-for-4 with a double in the first inning that scored the game’s first run.

A potential issue between Howard and Mackanin first surfaced Wednesday, when Howard expressed his frustrations after Mackanin said he planned to play Howard less in the final month of the season, which is expected to be Howard’s last in a Phillies’ uniform. The Phillies have a $23 million club option for Howard for 2017, but they are expected to take a $10 million buyout instead.

Howard told the Inky: “I think there comes a time when there needs to be more dialogue and more of an understanding of, ‘Why now?’ Now, when you’ve got three weeks left in the season? Why now? I’m going out and hitting and playing better and all of sudden it’s another wrinkle.”

Howard seemed upset that Mackanin addressed his playing time with the media before talking to him. Plus, he is hitting .304 (28-for-92) with five doubles, nine home runs, 21 RBIs and a .992 OPS in 32 games since July 3.

“I wouldn’t say I was frustrated,” Howard told MLB.com yesterday. “I was just speaking my truth.”

Said Mackanin: “He’s going to get more playing time than he thinks. It’s a matter of getting [Tommy] Joseph a few more at-bats against right-handers down the stretch.”

Howard is not returning in 2017 so the Phillies prefer to play Joseph more because he is expected to be the team’s first baseman in 2017. But Howard is the greatest first baseman in franchise history and the only remaining member from the 2008 World Series championship team. It could be bad form to have an iconic player like Howard leave the organization with a bad taste in his mouth.

“I don’t want him to leave here on a bad note,” Mackanin said. “He deserves respect.”