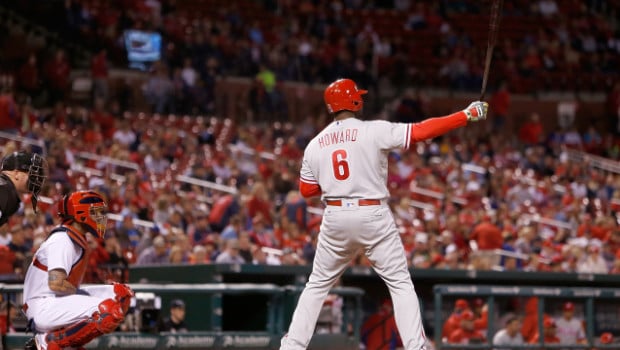 Howard drove the first pitch he saw from Michael Wacha in the sixth inning 411-feet over the right field bullpen in the Phillies’ 1-0 win over the Cardinals.

“I was just looking for something up in the zone,” Howard said. “He [Wacha] does a great job keeping the ball down, putting it where he wants to put it. He just kind of left that one middle and tried to take advantage of it.”

It was career home run No. 22 for Howard against the Cardinals. Howard’s average of a home run every 10.9 at-bats is the highest home run rate for any major league player with a minimum of 150 at-bats ever against St. Louis.

“It’s always good to be able to come home and play,” Howard said. “This is home. This is where it all began for me. I think it’s just something different when you get to play against the team you grew up watching.”

“For some reason certain guys hit well in certain ballparks,” Phillies manager Pete Mackanin said. “And you can count on Howie to hit the ball well here.”

It was the second time the Phillies have won 1-0 this season on a Howard home run. His homer against the Mets on April 9 was also the only run in that game.