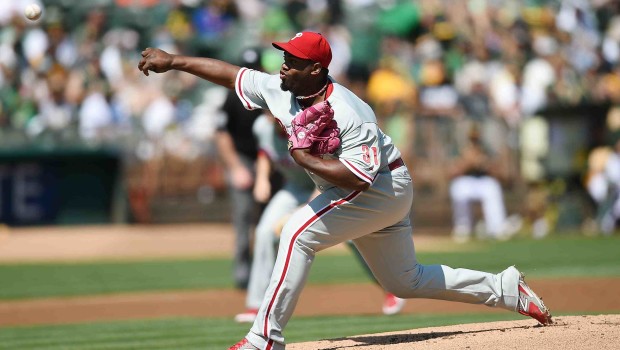 Jerome Williams takes the mound looking to bounce back from a rough outing. After giving up one run and striking out six over six innings in his season debut against Washington on April 10, Williams (0-1, 4.09) allowed five runs and 10 hits in five innings of Wednesday’s 6-1 loss to the Mets.

If you think Phillies manager Ryne Sandberg is behind the 8-ball with a team that cannot hit, field or pitch:

Check out Miami Marlins’ manager Mike Redmond whose team was supposed to be a lot better than they have been in the season’s first three weeks.

The starting rotation’s inability to eat up innings has taxed the Marlins’ bullpen and led to a disastrous start.

Relievers have gotten a bit of a break when Dan Haren gets the ball.

The Marlins (3-10) initially had trouble scoring, but the pitching staff hasn’t been able to keep opponents off the scoreboard even as the lineup has gotten going.

No starter recorded more than 16 outs as Miami lost all four to the New York Mets over the weekend. It allowed seven runs in an inning for the second time this season and fell 7-6 in Sunday’s finale.

The Marlins’ bullpen has pitched 47 2-3 innings – among the most in the majors – and has allowed an NL-worst 26 runs.

“There is a level of frustration,” manager Mike Redmond said. “We’ve got to get the pitching straightened out and get these guys deeper into games to get us opportunities. As an offense, we’ve got to stay with it, keep fighting, keep battling. We’ll figure out a way to put zeros up there on that board.”

Haren (1-0, 2.08 ERA) is the only Marlins starter to pitch more than 5 1-3 innings in the club’s last eight, going seven while allowing two runs and three hits in Wednesday’s 6-2 win at Atlanta.

The right-hander went six while allowing one run against Tampa Bay in his team debut April 10. The rest of the rotation has produced just three six-inning starts.

“We’ve had a couple of short outings and needed someone to go deep,” Redmond said after Haren’s last start. “He gave us exactly what we needed.”

Haren is 1-1 with a 2.37 ERA in his last three starts against the Phillies (4-9), who have scored two runs or fewer in five of their last seven.

Philly ended a six-game skid with Saturday’s 5-3 win over Washington before Freddy Galvis drove in the lone run in Sunday’s 4-1 defeat.

The Phillies’ 2.46 runs per game are among the fewest in the majors.

”It’s tough,” said first baseman Ryan Howard, who is hitting just .175 with 15 strikeouts. ”It’s still early enough to where you still have an opportunity. Just trying to take it one day at a time, one pitch at a time, one play at a time.”

Rookie Odubel Herrera has been one of the few offensive bright spots. He went 6 for 12 over the final three against the Nationals, and his seven extra-base hits lead the Phillies.

Jerome Williams takes the mound looking to bounce back from a rough outing. After giving up one run and striking out six over six innings in his season debut against Washington on April 10, Williams (0-1, 4.09) allowed five runs and 10 hits in five innings of Wednesday’s 6-1 loss to the Mets.

“(Wednesday wasn’t a) step back,” Williams said. “I’ll just put this one behind me and move forward.”

The right-hander hasn’t faced the Marlins since allowing a career-worst 10 runs – since tied – in a 12-6 loss while with Washington in 2007.

One thought on “PHILLIES HOST MARLINS — LOGIC DICTATES SOMEONE WILL WIN”