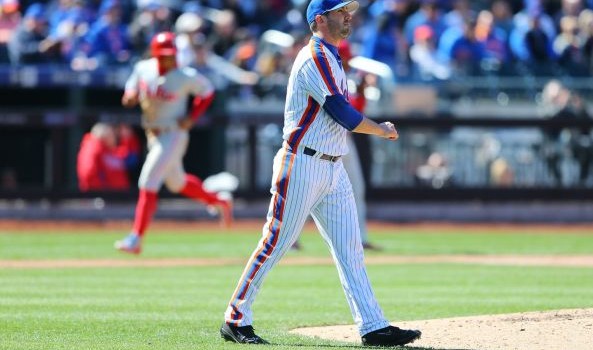 The dreaded defending National League champion New York Mets, whose fans believe that they are so good that we shouldn’t even play this season.

By the way, is there a more self-absorbed group of fans in the world than Mets-bots?

Just over a week ago, the Mets scuffled through the last two games of a series with the Phillies.

The offense is now showing signs of life, something that’s usually associated with Noah Syndergaard’s fastball.

The hard-throwing Syndergaard would certainly appreciate some help from the Mets’ offense as he goes for another dominant outing Monday night against the Phillies.

New York (5-6) entered the season with lofty expectations after winning the pennant last year, but dropped five of its first seven games, including two of three to the Phils from April 8-10.

The Mets were limited to two runs and seven hits while losing the last two games of that series, and they didn’t look much better by following that stretch with consecutive defeats to Miami and getting outscored 12-4.

After compiling a .194 average and scoring 2.5 runs through the first eight games, they were much more productive this weekend in Cleveland. The Mets totaled 17 runs, batted .279 and hit seven homers while taking two of three from the Indians.

New York won 6-0 Sunday, getting three doubles and a triple among its nine hits.

“It’s been a few good days,” said left fielder Michael Conforto, who was 5 for 12 in the series after being moved to third in the batting order. “Hopefully we can keep it going.”

Syndergaard (1-0, 0.69) surely hopes so since he’s been backed by three total runs through two starts. The right-hander only received one Tuesday, getting a no-decision after striking out 12 and yielding one run in seven innings in a 2-1 loss to the Marlins.

“He did exactly what you wanted. He got us to the eighth inning,” manager Terry Collins told MLB’s official website. “We just couldn’t put anything on the board for him to work with, but he was outstanding.”

Starting with their series win over the Mets, the Phillies have won six of nine. They avoided being swept by Washington on Sunday, winning 3-2 in 10 innings on Freddy Galvis’ walkoff double that followed Andres Blanco’s RBI single.

The Phillies didn’t need to do much with Jerad Eickhoff (1-1, 1.50) on the mound Wednesday against San Diego. The right-hander allowed four hits over seven scoreless innings and struck out nine in a 2-1 win.

Eickhoff is 1-3 despite 2.88 ERA in four career starts against the Mets. He was charged with a 7-2 defeat in New York during his season debut April 8, allowing two earned runs in five innings.

He’s had a tough time with Conforto, who is 5 for 10 with a homer and two doubles off him. However, Yoenis Cespedes,Curtis Granderson, David Wright and Travis d’Arnaud are a combined 3 for 27.

D’Arnaud is nursing a bruised left elbow that could sideline him for a second straight game. Kevin Plawecki had two hits in his place Sunday, but he’s 4 for 19 in seven career games against the Phillies.