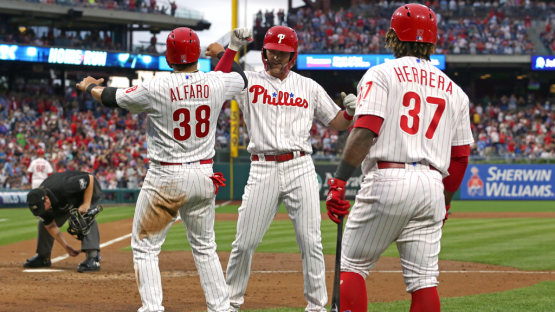 PHILLIES HOSKINS AND EFLIN SHOW YANKEES HOW TO LOSE!

Eflin won his fifth straight start and left the Phillies in second place in the NL East, two and a half games behind the Braves.

”You can see why they’re kind of excited about him,” Yankees manager Aaron Boone said. ”I thought he threw the ball really well and really was in command. He kind of shut us down. We were pretty quiet. Even when we’re not scoring runs, we’re mounting things. We really didn’t mount that much against him.”

He won his fourth game this month following a Phillies loss. Eflin walked two, struck out six and helped the Phillies avoid a three-game sweep before beginning a key four-game series against the division rival Washington Nationals. The Phillies trail the Atlanta Braves by 2 1/2 games, and the Nationals are 3 1/2 back.

”Being able to be healthy and to focus on pitching alone is probably the biggest thing,” Eflin said. ”Going in with a great game plan and two catchers who know how to call a great game is extremely beneficial. And doing that and putting the puzzle pieces together has been awesome.”

Eflin, who did not allow a homer over 30 2/3 innings in June, also at last got most of the 42,028 fans at packed Citizens Bank Park to root, root, root for the home team. Yankees fans swarmed the stadium for all three games of the series, and ”Let’s go Yankees!” chants boomed at first pitch.

By the time Searanthony Dominguez struck out Gleyber Torres to wrap up his fifth save, over two scoreless innings, Phillies fans were on their feet as Yankees fans trudged toward the exits.

”You need exposure to that because we expect to be in the playoffs many times in the coming years,” he said. ”These are young players that are going to be expected to perform under those conditions. It’s nice to have some exposure to that early in their careers.”

The Yankees, who have the best record in baseball at 52-26, sat slugging outfielder Aaron Judge for the series finale. Boone wanted to pair a day of rest with Thursday’s off day to keep Judge fresh when the team returns to the Bronx for a weekend set with Boston. The Yankees and Red Sox have been neck and neck atop the AL East, the only teams with a legitimate shot at the division title.

Luis Cessa (0-1) lasted only three innings in his first start for the Yankees since last Aug. 14 and was optioned to Triple-A Scranton/Wilkes-Barre after taking the loss.

The Phillies had two runners on and two outs in the second inning when Hoskins connected on an opposite-field shot to left for his 12th homer of the season. He hit his sixth home run in 17 games this June, and he has given the Phillies a lead with 11 of his homers.