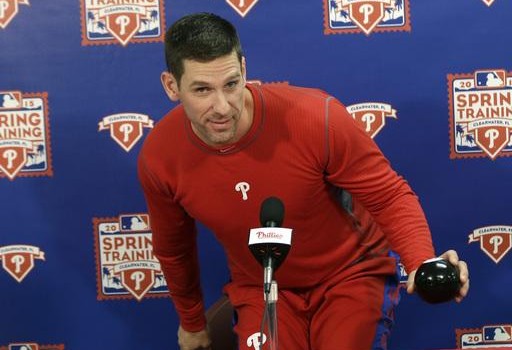 PHILLIES HOPE LEE’S CONFIDENCE IS STILL THERE IN APRIL

It is Feb. 20 and yesterday Phillies’ lefty Cliff Lee announced (photo above) he is confident his elbow problems from last year are behind him as he begins a new season.

Let’s see how does once he throws a pitch in anger, which he hasn’t done since he was shut down last July 31.

The 36-year-old veteran was limited to 13 starts in 2014, when he went on the disabled list twice. Lee missed the final two months of the season with a left elbow strain and didn’t begin throwing again until early December. Lee threw a bullpen session Thursday morning (photo at left) with the rest of his teammates on the first day of workouts for Philadelphia pitchers and catchers.

He said he feels good now after having some discomfort in his elbow when he began throwing in the winter.

”It feels like a normal spring so far,” Lee said. ”I feel normal. I don’t know if that’s good or what. But that’s what I feel like.”

Lee is in the fifth season of a five-year, $120 million contract he signed as a free agent before the 2011 season. The club also has a $27.5 million option for 2016 that becomes guaranteed if Lee pitches at least 200 innings in 2015 and is not on the disabled list with a left elbow or left shoulder injury when the season ends. The contract also includes a $12.5 million option buyout, so Lee is owed a minimum of $37.5 million going forward.

Despite his heavy salary, Lee could be an attractive trade commodity for the rebuilding Phillies, especially if he regains the form that made him one of baseball’s most bankable starting pitchers before the injuries. Lee won the American League Cy Young Award with the Cleveland Indians in 2008 and was 85-50 with a 2.89 ERA in 186 starts from 2008 through 2013.

His health remains a question despite his optimism as spring training begins in Clearwater, Florida, this week.

”I hold myself to a pretty high standard. I hold myself accountable,” Lee said. ”I’m proven to me, so I don’t really worry about having to prove to anybody else.”