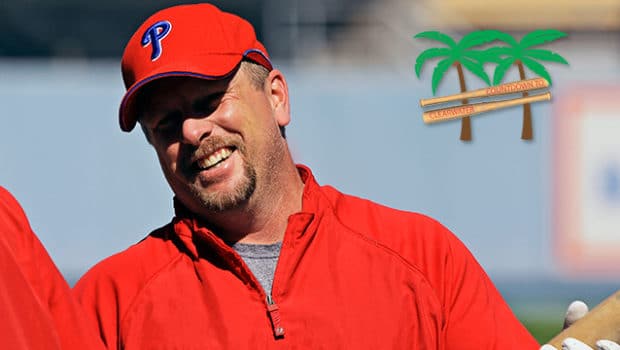 Stairs is now 49 and he regards pitchers the way Kalas’s favorite broadcast partner, the Hall of Famer Richie Ashburn, did on air: as an enemy easily dismissed.

“Don’t give respect to the pitchers,” Stairs told the New York Times. “They don’t respect hitters, so why respect pitchers? When you’re facing a Max Scherzer, you don’t say, ‘Oh, it’s Max Scherzer today’ — well, then you’re beaten already, because you’ve got negative thoughts. I just want the positive energy. I’m a very positive guy. I want guys to be upbeat.”

After winning the 2008 World Series — helped by Stairs’s towering pinch-hit home run in the National League Championship Series at Dodger Stadium — the team’s fortunes declined a bit each year that followed. In successive seasons, the Phillies lost the World Series, the NLCS and a division series. Then they finished in third place, fourth place, fifth place and, in 2015, with the worst record in the majors, at 63-99.

Last year brought an eight-game improvement, to 71-91, but trouble lurked. The Phillies’ opponents outscored them by 186 runs, the widest differential in the majors.

“Numbers don’t lie,” general manager Matt Klentak said. “The fact that run differential has correlated as well as it has with wins and losses over a long stretch of time is indicative of the fact that it’s real. Early in the year, we were winning a ton of one-run games. We had probably an unsustainably high winning percentage in close games early. That didn’t mean that the wins didn’t happen. That didn’t make it less fun. But there was probably a natural correction that was bound to happen, and it did.”

As he enters his second full season on the job — as the top baseball operations official under Andy MacPhail, the team president — Klentak tabbed Stairs to replace Steve Henderson as hitting coach. Stairs wanted a change, an outlet for all the clues he was gathering as he watched the young hitters struggle. Manager Pete Mackanin was eager to welcome him.

“He’s passionate, he’s had success at the major league level, I like what he says, I like what he preaches,” Mackanin said. “He works well with the players, he has their respect, and he communicates extremely well.”

Part of that comes from Stairs’s breadth of experience. In 19 major league seasons, he bounced to 13 teams in 12 organizations, starting with the Montreal Expos and ending with their successors, the Washington Nationals. He hit as many as 38 homers in a season, for Oakland in 1999, but by the end he tried unapologetically to go deep in every at-bat: His job was to smash pinch-hit homers, and he set the career record with 23.

That made Stairs, who is 5 feet 9 inches and 225 pounds, something of a folk hero to fellow players. His raw power was a sight to behold.

“I’ve always been in awe of him, just the way he swung and how hard he hit the ball,” said Howie Kendrick, the Phillies’ veteran left fielder. “He could really crush baseballs.”

The bench coach Larry Bowa, a longtime Phillie who was a Dodgers coach in 2008, called Stairs’s famous playoff homer “sickening” — and agreed that it might still be traveling. Of course, Bowa said, Stairs will not make all players hit the way he did, but he should help them mimic one part of his game.

“We’ve got a bunch of guys that take a lot of fastballs,” Bowa said. “I don’t care how hard a guy throws, the ball that’s straight is the easiest one to hit, as opposed to a split or a slider or a curveball. And for some reason, this group, the last two or three years, has had a tendency to take a lot of fastballs. If you watched him hit, he was a dead-red fastball hitter.”

The Phillies hit just .261 off fastballs last season — 15 points below the major league average, according to MLB.com — and Stairs speaks repeatedly about the folly of giving away at-bats. That is another way of saying that the team’s hitters too often abandon their game plan, chasing pitches they can’t handle instead of hunting the ones they can.

He is seeing some progress. Third baseman Maikel Franco has his swing under control — his helmet isn’t flying off anymore, Stairs said — and outfielder Aaron Altherr has lowered his hands to be quicker to the ball. Newcomers like Kendrick and Michael Saunders, both former All-Stars, can help Stairs with their young colleagues.

The champion Phillies are gone from the roster now, with the last, Ryan Howard, finishing his contract last season. The Phillies have just one player signed beyond this season — center fielder Odubel Herrera — and have been careful not to block any top prospects.

The overriding question is whether they have superstars somewhere in the farm system. Some possible cornerstones — shortstop J.P. Crawford, catcher Jorge Alfaro and outfielder Nick Williams — will start the season at Class AAA. Others are further away, like outfielder Mickey Moniak, 18, the top pick in last June’s draft, who reminds some evaluators of Christian Yelich, the Miami Marlins’ star. The Phillies draft eighth over all this year.

For now, the everyday lineup, like the rotation, is set, with Kendrick, Herrera and Saunders in the outfield; Franco, shortstop Freddy Galvis, second baseman Cesar Hernandez and first baseman Tommy Joseph in the infield; and Cameron Rupp as the catcher.

Everybody hits? Not likely; not yet. But can everybody get better? The team’s new coach was ready to leave the booth and see for himself.

“I just thought it was time to get down there,” Stairs said. “With a younger team with great potential, it’s time to give my wisdom.”