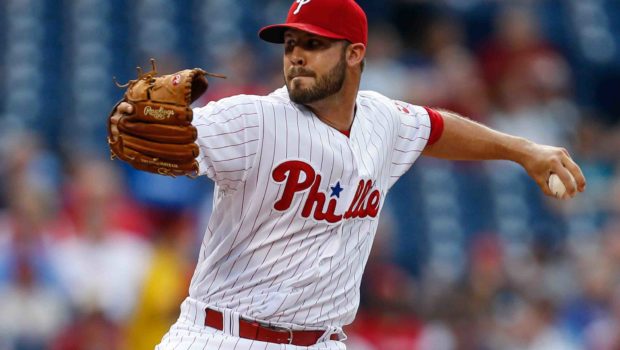 PHILLIES HAVE REVENGE ON TAP AS CUBBIES COME TO TOWN

The Phillies will have revenge on their minds tonight at the Bank when the MLB-best Chicago Cubs come to town.

The Phillies were swept in Wrigley Field 10 days ago, and they will send out a struggling Adam Morgan (1-4, 7.07), who was the loser in last month’s matchup with Jon Lester.

Morgan (above) gave up six runs in four-plus innings in that game and yielded another six in six innings in a 7-2 defeat to Washington on Wednesday, dropping to 0-4 with a 9.61 ERA in his last four starts.

Morgan has allowed five homers in his past two outings and gave up a season-high three to Chicago. David Ross hit a three-run shot while Kris Bryant and Jorge Soler had solo homers.

“He’s got stuff. There’s a lot of guys that have stuff, but in order to be successful, you can’t make mistakes. You have to keep the ball down in the zone and hit the corners,” Mackanin said. “That’s how you become a good major league pitcher. He’s got the stuff to do that, the instinct to do it. But this is a result-oriented business, especially here.”

It’s unclear if Mackanin will put Ryan Howard back in the lineup to open this series instead of rookie Tommy Joseph. Howard, batting .151 this season, was limited to pinch-hit appearances in the first five games this month. Joseph started at first base in his place and went 7 for 16 with a homer in the past four contests.

Chicago leading hitter Ben Zobrist went 5 for 12 with four RBIs in the sweep of the Phillies but is 0 for 13 over the past five games.