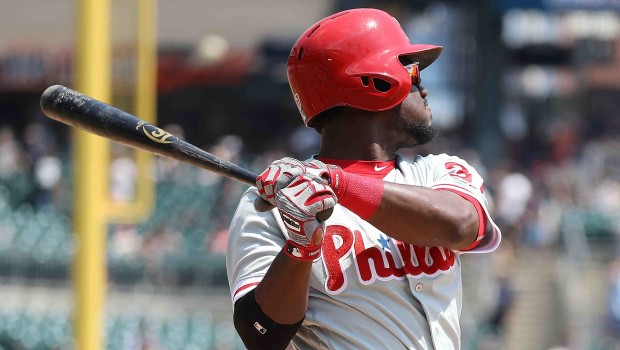 PHILLIES HAVE MAX SCHERZER IN THE WAY TONIGHT!

Ryan Howard is 1 for 18 with 11 strikeouts against Scherzer, and Maikel Franco is 1 for 12. They share the team lead with eight homers, but at home, Howard didn’t have one in May and Franco has one all season.

The Phillies will try to salvage a game against the Nats tonight at the Bank, but Max Scherzer is pitching in the way!

Washington (31-21) didn’t miss Harper on last night, collecting four homers in a 5-1 victory. Bryce Harper, the reigning NL MVP was out with a right knee bruise suffered when he was hit by Jeremy Hellickson’s fastball in a 4-3 win Monday.

“It just feels the same as yesterday,” Harper told MLB’s official website. “There’s nothing good or bad or anything.”

With the slugger saying the knee was as sore yesterday afternoon as it was Monday night, manager Dusty Baker might lean toward playing it safe. Baker mentioned the Nationals being off Thursday – that would give his star three full days to recover if he sits out Wednesday – plus the Phillies are starting left-hander Adam Morgan and Harper is batting .115 against southpaws since April 21.

Harper, though, has flourished in Philly, hitting .457 with eight homers and 14 RBIs in his last nine games there.

Scherzer’s track record in Philly is also impressive, yielding four runs in 21 innings with 22 strikeouts. Excluding a loss in his 2008 rookie season, the right-hander is 5-0 with a 1.65 ERA in seven starts against the Phillies with three home runs allowed.

Scherzer (5-4, 4.05 ERA) has served up a major league-high 15 homers this season, including 10 in his last five starts. Stephen Piscotty’s grand slam was one of only three hits he allowed in seven innings of Friday’s 6-2 loss to St. Louis.

”I know I’ve been giving up a ton of home runs,” Scherzer said, ”but that one, that’s just an execution thing. That’s just me not throwing the right pitch at the right time and with poor execution.”

Baker was bothered more by the four walks he issued, including one with the bases loaded.

”It wasn’t the home run pitch,” Baker said. ”It was the walks before the home run. That’s what really hurt.”

Ryan Howard is 1 for 18 with 11 strikeouts against Scherzer, and Maikel Franco is 1 for 12. They share the team lead with eight homers, but at home, Howard didn’t have one in May and Franco has one all season.

Philadelphia has 13 homers in 24 games at Citizens Bank Park while opponents have 31. The Phillies have hit twice as many homers on the road and are averaging a league-worst 2.8 runs at home.

”We’re just getting out-homered every night,” manager Pete Mackanin said. ”Once again, I feel like it’s a broken record. We’re not hitting.”

Daniel Murphy has homered in both games of this series, part of Washington’s 21 home runs in its last 10 games in Philadelphia. The Nationals have won 10 of 12 there.

Murphy, riding a 10-game hitting streak, tied a franchise record with 47 hits in May as he batted .416 with seven homers and 23 RBIs.

Morgan (1-3, 6.67) is facing the powerful Nationals for the first time after giving up three homers Friday at Wrigley Field, allowing six runs in four innings. It was the third straight defeat for Morgan, owner of the Phillies’ highest ERA.

The only team against which he’s had a quality start is NL-worst Atlanta, which has scored the fewest runs in baseball. Excluding two outings versus the Braves, Morgan has a 10.26 ERA with 27 hits allowed in 16 2/3 innings.

“At this level, you have to be more consistent to be successful, and he’s capable of doing it,” Mackanin said.