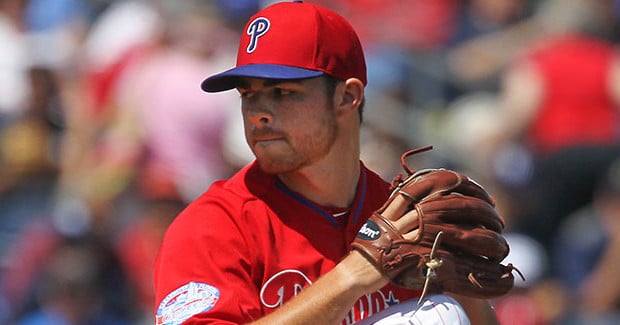 PHILLIES HAVE ALL BUT GIVEN UP ON LEFTY HOMEBOY JESSE BIDDLE

When the Phillies drafted homeboy Jesse Biddle 27th overall in 2010, they were hoping to find a diamond out of Episcopal Academy.

But injuries and inconsistency made his path to the major difficult, and on Friday the Phillies all but gave up on him.

The 6-5 Biddle, 24, was designated for assignment when the Phillies needed to free up a spot on their 40-man roster by acquiring left-hander reliever Bobby LaFromboise off waivers.

Phillies GM Matt Klentak has 10 days to decide what to do next with Biddle, who could be traded, released or out-righted to the minors as a non-roster player if he clears waivers.

Biddle hasn’t developed as the Phillies had hoped despite having somewhat impressive numbers and he’s probably going to miss the entire 2016 season recovering from October 2015 Tommy John surgery.

The Germantown Friends High product was ranked by Baseball America as the Phillies’ No. 1 prospect in 2012, but currently isn’t listed in the top 10.

Biddle has no big-league time and just nine starts worth of Triple-A experience in six pro seasons.

Biddle was let go so the Phillies could add a journey bullpen piece who had good numbers in 2015.

LaFromboise, 29, pitched to a 1.13 ERA over 11 big-league games for the Pirates and was 1-2 with a 2.98 ERA in 54 outings for Triple-A Indianapolis. Pittsburgh, however, must have been too impressed because the Angels claimed him off waivers on Dec. 23.