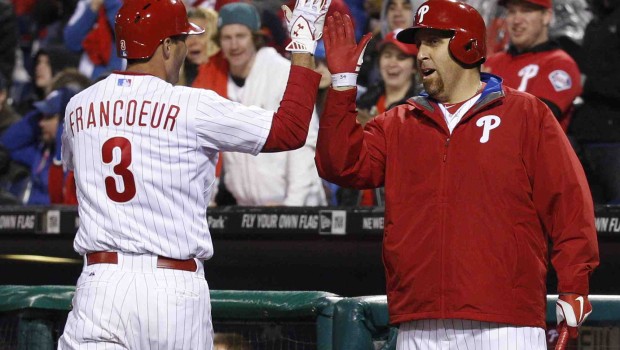 If you watched the Phillies’ 4-2 victory over the Boston Red Sox, you had to be heartened by the fact that the Phils actually scored some runs, which, after their 8-0 shellacking on Monday, is a great sign.

But the other subplot was the victory of performance over money.

The big stars generally get the big bucks, especially once they get closer to free agency. And talent usually prevails in the long run.

The Phillies beat the Red Sox, who sent Rick Porcello to the mound to face right-hander Aaron Harang.

Porcello was fresh off signing that four-year, $82.5 million contract extension before throwing his first regular-season pitch for the Red Sox. Harang is with his seventh team in the last six seasons and is making a base salary of $5 million, barely above the major league average.

Harang was even better on a night when a dank mist drifted lazily through the bright night lights for most of the game. He pitched 6 1/3 shutout innings, striking out eight, six of them in the first three frames. Harang gave up just two singles and retired 18 of the first 19 batters he faced.

Harang has an interesting perspective on the whole phenomenon. After all, about a decade ago, he was in Porcello’s position. Harang led the National League in strikeouts and complete games in 2006. He finished fourth in the NL Cy Young Award voting the following year. Harang also had three straight seasons of pitching more than 200 innings.

“When guys are slotted as top-tier pitchers, it’s fun to go out and compete against those guys,” Harang said. “I used to be in that role. I spent a number of years in that role. As you get older, you kind of fall out of that role because younger guys come up. I’ve been fortunate enough to be in that situation. I’ve made enough money to where I’m not worried about that. I want to go out and play and have fun and win.

“[How much money a player makes] depends on where you’re at in your career, what organization you’re with at the time, how you’ve been doing at the time. … Don’t get me wrong. Porcello is a great pitcher. I’ve faced him for a number of years. You’re happy for those guys when they do sign deals like that. It’s just one of those things.”

Porcello, Wade Miley and Justin Masterson were all brought in by the Red Sox during the offseason to bolster the rotation. Harang, apparently, wasn’t on their radar. He didn’t sign with the Phillies until January.

“Not that I knew of. Obviously it was a situation where there were other guys ahead of me,” Harang said with a shrug. “For me, anymore, it’s just going out and winning. Giving the team a chance to win. I know what I’m out there to do. I know what my job is when I go out there. That’s to get us deep into the game and give us a chance to win. That’s what it comes down to for me.”

The Red Sox were thrilled to lock up the 26-year-old Porcello now. Manager John Farrell talked before Wednesday night’s game about how important it was to ensure that a talented young pitcher entering what should be the prime years of his career won’t be going anywhere for a while. And there’s no reason to suspect that this won’t turn out to be an astute move for Boston.

Ultimately, though, that will be determined by how well he pitches, not how much money he makes.

After all, the Phillies’ biggest hit of the night was a three-run homer off Porcello in the sixth. And you can be sure that Jeff Francoeur wasn’t thinking that his major league base salary is $925,000 when he nailed it.