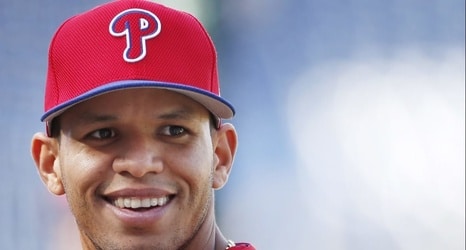 PHILLIES HAPPY TO HAVE HERNANDEZ BACK IN THE LINE-UP!

Cesar Hernandez is happy to be back in the Phillies’ lineup after having missed time with a strained left oblique.

Without Aaron Altherr in the lineup, Hernandez picked up some productivity slack in the seventh inning. Following a walk, hit-by-pitch and a sacrifice bunt to put runners on the corners, Hernandez lifted a Kyle Barraclough 2-1 slider to center to tie the game at five.

Outside a missed bunt attempt in the ninth, Mackanin was pleased with Hernandez’s play.

“He did fine. He didn’t get the bunt down, so obviously a little disappointed in that,” Mackanin said. “But other than that, he looked fine. He got that infield hit, and he’s back in the saddle.”

Hernandez’s productive night at the plate was a good sign after an up and down first half. Through his first 29 games this season, the switch-hitter was hitting .339 with a .892 OPS. His next 29 games before he landed on the disabled list, he hit .211 and posted a .566 OPS.