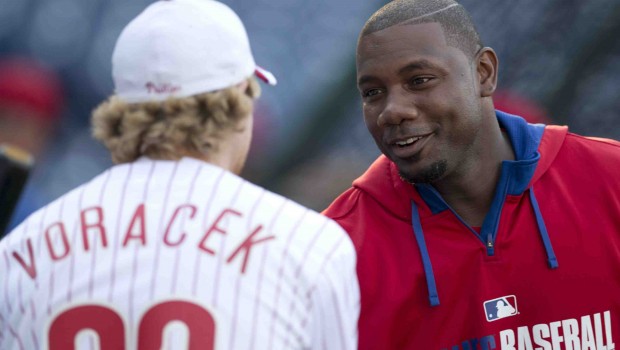 PHILLIES' GROUNDHOG DAY OF A SEASON IS ALMOST AT AN END

Howard passes the torch of fan interest to the Flyers’ Jakub Voracek.

The next to last game of the Phillies’ 2014 season was like Groundhog Day.

The movie, not the rodent event in western Pennsylvania in February.

Another A. J. Burnett start, and another loss.

All that was missing was Sonny and Cher singing “I Got You, Babe.”

“It’s obviously a frustrating year,” Burnett said. “You come over here and you expect to make an impact. And you make the wrong impact.”

Burnett has pitched with an inguinal hernia since April. He said he wished he would have taken care of it earlier, because it bothered him throughout the season.

He obviously didn’t have the surgery in April because, rather than the two to three weeks recovery that has been reported, the rehab take muchs longer.

Ryan Howard paced the Phillies on offense, homering in the second and singling to score Chase Utley in the sixth inning to tie the game as part of a 3-for-4 night. But Burnett walked Freddie Freeman to start the seventh. Justin Upton followed and hit a 1-2 curveball to left-center field for a two-run home run to hand the Braves a 4-2 lead.

Burnett then walked Jason Heyward, and Phillies pitching coach Bob McClure visited the mound. Burnett seemed disinterested in whatever McClure had to say. He turned away at one point, and as McClure left the mound to return to the dugout, Burnett could be seen on TV uttering an expletive.

Burnett said it wasn’t directed at his pitching coach.

“Heck no,” Burnett said. “… Not one bit. It was just everything. Frustration. We’re great.”

Burnett said earlier that his relationship with McClure is fine.

“Mac’s been great,” Burnett said. “He’s been in our corner. He’s done nothing but support us all year. I was more hot about that hook. I haven’t hung that many hooks. I don’t think I hung a hook all last year.

“It seems I’m getting beat on my best pitches a lot. It’s frustrating. It’s tough to swallow.”

Burnett indicated in San Diego two weeks ago he probably would pitch next season if he could lift his right arm above his head. It sounded like he might be dealing with more than just the hernia, but he said Saturday his arm is healthy.