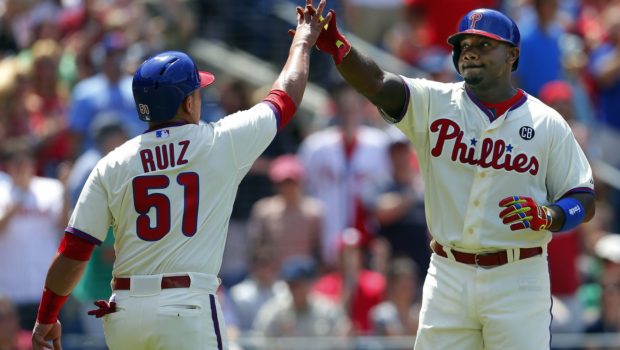 Carlos Ruiz and Ryan Howard will finish the season on the Phillies roster.

ESPN.com reported yesterday that both players have cleared waivers, which means the Phillies can trade them before the Aug. 31 deadline to make players eligible for postseason rosters.

Both players could help contenders, but at the moment, it’s unlikely either is dealt.

Howard has hit .324 (24-for-74) with four doubles, eight home runs, 18 RBIs and a 1.062 OPS since July 3. But it is believed the Phillies prefer to finish the season with their iconic first baseman, rather than flip him to a team for a minimal return — if any teams express interest in him.

Ruiz has started four of the last six games, including as a designated hitter on Tuesday, but Phillies manager Pete Mackanin said that is just a coincidence and not the Phillies showcasing him for potential suitors.

“Maybe it’s possible,” Ruiz said. “Maybe it’s not. Depending on how everything goes, it’s possible. So far, there’s nothing. I don’t know. I’m still happy here. It was something I was thinking early in the season to now. We’ll see what happens.”

Both Howard and Ruiz have full no-trade rights, but Ruiz has indicated he would love to play in the postseason again.

“That’s definitely one of my goals, to come back to the postseason and have a chance to go to the World Series,” Ruiz said. “I’d like to go and win this thing. It’s going to be a tough decision you’ll have to make. But baseball continues, life continues and I have to continue to work.”