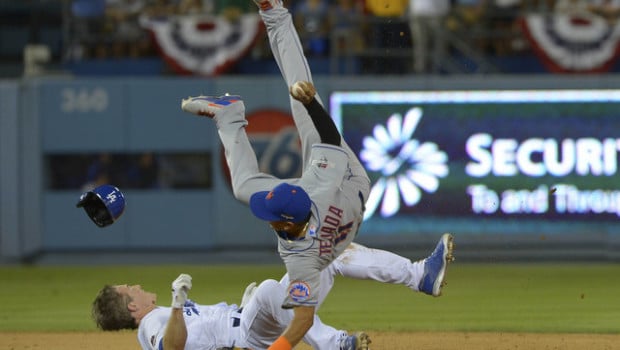 PHILLIES GREAT CHASE UTLEY GET HIS OWN SLIDE RULE!

There is now a Chase Utley Rule!

MLB and the players’ union have banned rolling blocks to break up potential double plays, hoping to prevent a repeat of the takeout by Utley that broke the leg of New York Mets shortstop Ruben Tejada during last year’s playoffs.

”From my understanding, we’ve been trying to work on this for a few years now,” Utley said at the Los Angeles Dodgers’ camp, ”so I don’t think one instance determined everything.”

Maybe, but fans may see it another way – the Chase Utley Rule.

An umpire can call both the runner and batter out for a violation. Baserunners may not elevate or kick a leg above the fielder’s knee or throw his arm or upper body.

A runner who makes a permissible slide cannot be charged with interference, even if he makes contact with a fielder.

”I imagine there will be a little bit of an adjustment for the middle infielders, but also the baserunners,” Utley said.

Tejada missed the World Series due to the injury sustained at Dodger Stadium in the NL Division Series. Utley was suspended for two games, a penalty still under appeal.

”Did Chase catch him good? Yeah. Could Tejada have maybe done a couple things to get out of the way?,” said Phillies infielder-outfielder Cody Asche, a former Utley teammate.

”I didn’t have any problem with that, even if it looked a little dirty,” he said. ”But in that situation, I’d probably be doing the same, trying to break the double play.”

But then he added: ”As a fielder, that’s awesome. Nobody’s going to get you if you’re out of the way.”