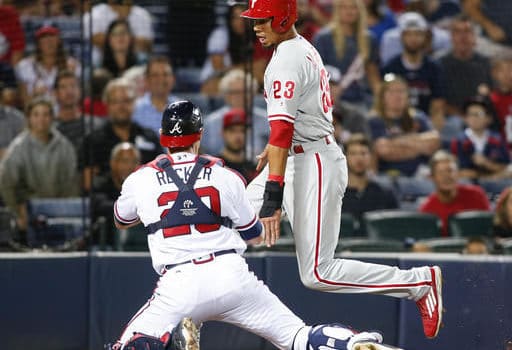 Freddie Freeman’s 30-game hitting streak ended last night when he struck out in the eighth inning of a tie game but the Atlanta Braves quickly scored four runs to beat the Phillies 5-2.

The longest hitting streak in the majors since 2011, when Atlanta’s Dan Uggla went 33 straight, is over yet the Braves continue winning — especially against the Phils.

Moments after Phillies closer Jeanmar Gomez (3-5) struck out Freeman, Matt Kemp doubled off the wall in right field. That scored rookie Dansby Swanson, who walked before Freeman’s at-bat, for a 2-1 lead.

Jace Peterson added an RBI single and pinch-hitter Emilio Bonafacio added a two-run single to give the Braves their seventh straight victory over the Phillies, and their 10th win in 11 games.

“Some guys drive runs in,” Atlanta interim manager Brian Snitker said of Kemp, who has 38 RBI and 11 home runs since being traded from San Diego on Aug. 2 to help the Braves average 5.3 runs in that time. “He’s just one of them guys you can count on.

“You kind of feel good about our offense. … The umpires say, `Play ball,’ and our guys are expecting to win right now I think. We’re going to go out there and win the game somehow.”

The Phils are heading home in the other direction. The Phillies lost six of seven games on a road trip on which they were outscored 68-33.

Starter Jeremy Hellickson, who entered 12-10 with a 3.78 ERA, left with a 1-0 lead after 3 1/3 innings because of a sprained right knee. He hurt himself running the bases as he scored in the third on Odubel Herrera’s soft hit to left field.

Philly’s bullpen was fine until Gomez came on in the eighth and gave up four earned runs, hitting a batter, walking two and allowing three hits in 1/3 of an inning.

Atlanta tied the game in the sixth on Swanson’s third home run, his first in Turner Field.

Mauricio Cabrera (5-1) became the first Braves rookie reliever since Mike Stanton in 1991 to record at least five wins and five saves (6) when he retired the only batter he faced in the top of the eighth. He induced cleanup hitter Tommy Joseph to line out to left field with a runner at second.

Braves started Josh Collmenter, acquired Sept. 14 from the Cubs for cash, allowed one run in seven innings. He earlier appeared in relief in 15 games for the Diamondbacks before Arizona released him.

“The whole atmosphere is not that of a club that’s in the position we’re in,” he said. “It’s a laid-back environment and everybody’s excited to come here every day. To think that my season was prematurely over a few weeks ago …”