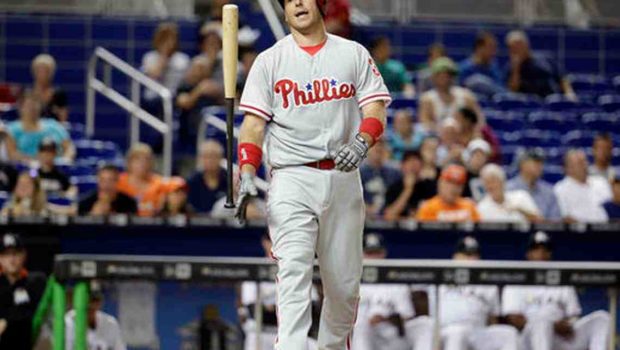 Andrew Cashner struck out nine over 5 1/3 innings to win his first game for the Marlins, a 6-0 victory over the Phillies last night.

Acquired from San Diego on July 29, Cashner (5-11) allowed four hits and matched his season high for strikeouts. He had been 0-4 in his first six starts following the trade.

“It’s kind of been a struggle since I’ve been over here,” Cashner said. “We had a different lineup tonight. It’s good to have some guys back and get us rolling.

Cashner walked two and kept the Phillies off balance by pitching to all parts of the plate.

“He had a good mix of his pitches, fastball and slider, and he was effectively wild at times as well,” Phillies first baseman Tommy Josephsaid. “He pitched to his game plan.”

Martin Prado drove in three runs for the Marlins, who faded from playoff contention by losing their previous five games and 10 of 11.

“We still have a lot of baseball left,” Cashner said.

“I made too many mistakes early in the count especially the first couple of innings,” Hellickson said.

Ichiro Suzuki tripled in the first and scored Prado’s groundout. Sacrifice flies by Realmuto in the second and Prado in the fifth boosted the lead to 3-0.

Cesar Hernandez had two hits for the Phillies.

Phillies: 3B Maikel Franco did not play after jamming his right thumb during Sunday’s game against Atlanta.