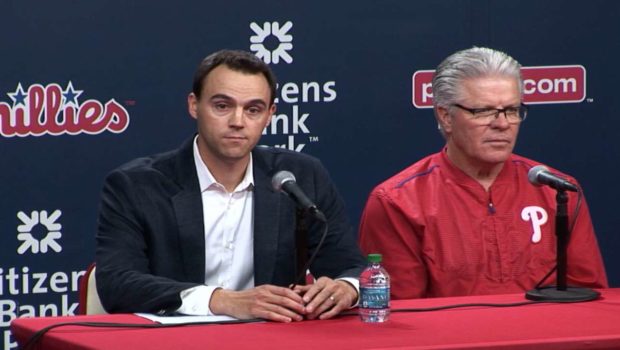 Only in America in 2017 can a firing be described as a transitioning!

“We’re not firing him. We’re transitioning him into a new role,” Klentak said. “I think now with the way the rebuild is unfolding and the way that some of our young players are graduating to the big leagues and the way that the outlook is shaping up, that is why I think a new voice in the dugout and a new style is necessary. It has nothing to do with me not liking Pete or being disappointed in him.

“I’ve said a lot of nice things about Pete that were entirely sincere. I think it’s about finding a connection with the team and with the players and leading us on into the future.”

Mackanin seemed visibly upset at the beginning of a nearly 30-minute news conference.

Mackanin said he never asked Klentak why he would not return as manager. He said he does not care to know why, and is happy to remain in the organization.

Klentak said he made the decision to remove Mackanin in the past week. He broke the news to the manager on Thursday.

The entire coaching staff has been told to pursue other job opportunities, although the front office could push the new manager toward certain members of the coaching staff, if management thinks they performed well in their roles and if the coaches have not found new jobs.

“Our goal for that search will be to identify a leader that can help lead us into the future and take us to where we want to go,” Klentak said.

“One of the important things for us is to understand — particularly when you’re fielding a roster of this many young players — that growth can come quickly,” Klentak said. “Sometimes it comes a little more slowly. You just don’t know with young players. Trust me, I’d like nothing more than to contend next year right from the very beginning, but I don’t really want to place any limitations on that.

“I do think we have seen over the last two months or so with a lot of these young players, it bodes very well for our future. How quickly that manifests itself and takes shape and turns into a playoff team remains to be seen, but we’re going to do everything that we can to make sure that happens.”