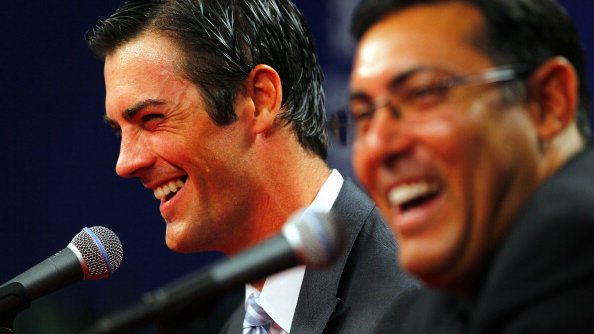 Every day that dawns is another day that Phillies’ general manager Ruben Amaro Jr. changes his story about the chances of trading Cole Hamels.

Just days after saying he expects Hamels to be the Phillies starter on opening day, Amaro now tells CSN Philly he has received several offers recently for the southpaw ace.

In fact, Amaro says he has had eight inquiries about Hamels and four of them are what he would describe as ‘real’ offers. Here is what CSN’s Jim Salisbury wrote on Wednesday:

How many teams have made offers?

Amaro didn’t tip his hat to whether he will actually trade Hamels anytime soon, but saying he has fielded real offers would suggest he’s at least considered it. He also told CSN Philly he had teams tell him they will be watching closely as the Phillies proceed through spring training down in Clearwater, Fla.

The Padres would seemingly be out of the Hamels mix at this point, as they just signed James Shields to a lucrative free agent deal. The Red Sox, Cardinals, Dodgers and Cubs have also been linked to Hamels in rumors this offseason.

Hamels is still on the Phillies, but it still sounds like there’s a good chance he gets traded.