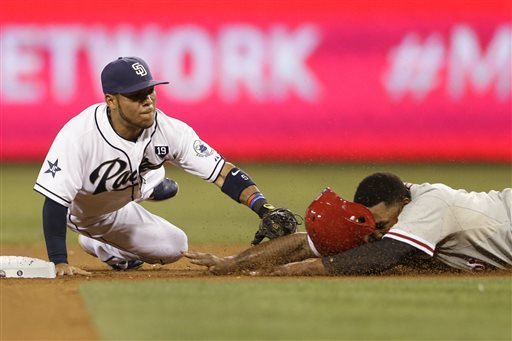 Even in mid-September in this horrible season, the Phillies find new and excruciating ways to lose.

The good thing is the game was in San Diego, didn’t start until after 10 pm, and everyone was watching the Eagles victory in Indy.

Andrew Cashner pitched a two-hitter for his third career shutout and the San Diego Padres scored on Cody Asche’s fielding error in the second inning Monday night to beat the Phillies 1-0.

Casher (4-7) allowed two hits, struck out seven and walked one in winning for the second straight time after going winless since April 16 against Colorado. Cashner has a franchise-best 17 straight home starts where he’s allowed two or fewer earned runs.

Jerome Williams (3-2) limited the Padres to an unearned run, three hits and two walks in 7 2-3 innings.

The Padres scored in the second, when Rene Rivera opened the inning with a double. He scored when Cashner hit a hard grounder to Asche at third. Asche tried to backhand the ball, but was unable to do more than knock it down in drawing the error.

Cashner, who blanked the Tigers on April 11, retired the first 11 batters before Chase Utley walked.

Cashner had a no-hitter going until Dominic Brown bunted safely down the third-base line with one out in the fifth, with the Padres deploying a shift on the left-handed hitter.

Brown got a long look from Cashner after he reached first. Wil Nieves followed with a pop up to Jedd Gyorko, with Brown running on the pitch.

Brown was doubled off (photo above) when he neglected to re-touch second returning to first base.

The Phillies threatened in the seventh when Marlon Byrd singled and tried to advance to second on a flyout. Byrd was thrown out for the Padres’ second double play in four innings.