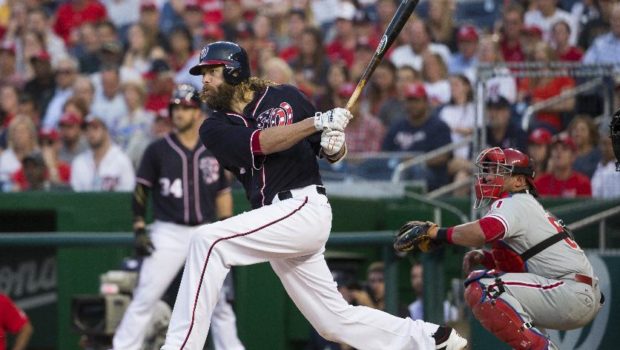 The Phillies got to Stephen Strasburg early, but the hottest pitcher in MLB settled down and won his 10th game.

Strasburg retired the final 14 batters he faced to lead the Nationals to a 9-6 victory over the Phillies last night.

Strasburg (10-0) stumbled early, allowing two runs in the second inning and a two-run home run to Tommy Joseph in the third. But after that, he was dominant, reaching double-digit strikeouts for the seventh time this season.

“It’s just about trying to go out there and [doing] your job,” Strasburg said. “They’ve been swinging the bat great for me, and I’m going to continue to try and keep it close for them.”

“I made way too many mistakes, and they didn’t miss a lot of them,” Hellickson said. “The biggest thing was just falling behind. Command wasn’t good, especially early in the counts.”

The Phils bullpen was unable to quiet Washington’s lineup, as callup Luis Garcia gave up two more runs in the seventh.

Philly got those runs back in the eighth on another two-run homer by Joseph, but Jonathan Papelbon closed the door for Washington in the ninth.