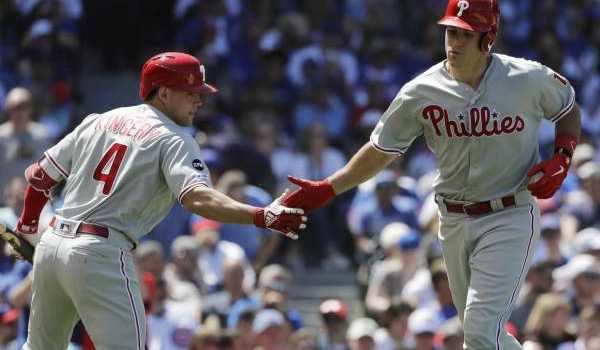 PHILLIES GET SERIOUS, WHACK JON LESTER AND THE CUBS!

Whether the Phillies season ends in the World Series or way before that, this four-game series in Wrigley Field against the top-notch Chicago Cubs laid down a marker to the rest of the National League:

DON’T SLEEP ON THE PHILS!

Jean Segura and J.T. Realmuto homered off Jon Lester, and the Phillies beat the Cubs 9-7 for a split of the four-game series between division leaders.

The Phillies won 5-4 in 10 innings in the series opener Monday night. They also held the lead each of the previous two days, only to falter down the stretch. But they managed to hold off the Cubs in the finale behind Hector Neris’ adventurous four-out save.

”He had the gutsiest performance possible out there,” Philadelphia manager Gabe Kapler said.

After pitcher Tyler Chatwood’s pinch-hit double got Chicago within two in the ninth, Neris struck out Addison Russell and retired Victor Caratini on a fly ball to left to close out his eighth save in eight chances. Neris entered with runners on first and second in the eighth and retired Javier Baez on a deep fly ball to left.

”He stayed in there and battled and got the outs that we needed,” McCutchen said. ”That’s all you can ask for from a closer.”

Anthony Rizzo and Kyle Schwarber homered for Chicago, which had won three of four. Rizzo finished with four hits and three RBIs, but the NL Central-leading Cubs were unable to overcome a second consecutive shaky performance by Lester (3-3).

Realmuto gave the Phils a 4-0 lead in the third when he belted a solo drive over the bleachers in left for his seventh homer. The Phillies added three more in the fourth, taking advantage of some shoddy fielding by Chicago.

With Sean Rodriguez aboard after a one-out single, Nola successfully bunted a two-strike pitch from Lester and catcher Willson Contreras threw wildly to first for an error. McCutchen then hit a bouncer up the middle that looked like a possible inning-ending double play, but second baseman Daniel Descalso’s throw pulled Rizzo off the bag at first.

Rodriguez scored to make it 5-0. Segura followed with a long drive into the bleachers in left-center for his fifth homer for the NL East leaders.

”We had a couple of mistakes early, but the intensity of our guys is outstanding,” Cubs manager Joe Maddon said.

Lester was 8-0 with a 1.49 ERA in 10 career starts against the Phillies before yesterday.

”Something just doesn’t feel right,” Lester said. ”The last two starts kind of speak for themselves. We’ve just got to figure it out.”

Segura also doubled in the third to extend his hitting streak to 14 games. The shortstop is batting .325 in his first season with the Phillies.