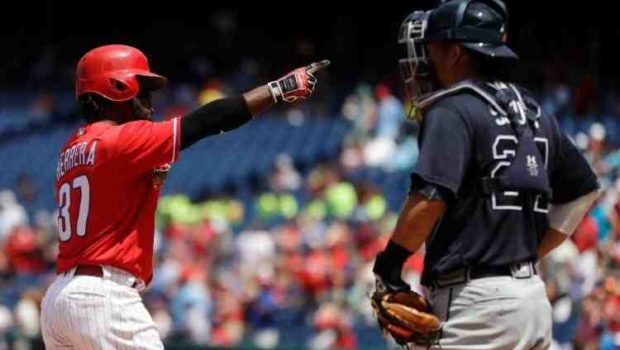 PHILLIES GET TO THE POINT! 5 WINS IN A ROW AFTER SWEEPING BRAVES!

Odubel Herrera and Maikel Franco hit homers as the Phillies beat the Atlanta Braves 7-6 to complete a four-game sweep.

The Phillies are 10-6 since the All-Star break, but still own the worst record (39-64) in the majors. They’ll take a look at their young players over the final two months.

“I like the energy of the youth,” manager Pete Mackanin said. “You want to watch these guys, and I think there’s some competition there. The competition comes from results that certain players get and that’s what we’re seeing right now. Hopefully it’ll continue until the end of the season.”

Nick Pivetta (4-6) gave up one run and three hits, striking out five.

The Phillies are 7-0 against Atlanta at Citizens Bank Park this season. They posted their first four-game sweep of the Braves at home since September 1949, over the Boston Braves.

Atlanta, which trailed 5-0 through four innings, was down 7-5 and had the bases loaded with two outs in the eighth when Luis Garcia struck out pinch-hitter Tyler Flowers swinging at a 99 mph fastball.

Hector Neris allowed an RBI single to Nick Markakis in the ninth, but retired Suzuki on a fly ball with runners at first and third to end it, earning his 10th save in 13 tries.

“A tough stand here, obviously,” Snitker said. “We came back and had a chance. These kinds of (streaks) happen.”

Herrera drove a 3-2 pitch into the second deck in right field for his 11th homer, giving the Phillies a 4-0 lead in the third inning.

Joseph had another RBI single in the fourth to make it 5-0. Hernandez scored on a groundout in the sixth for a 6-1 lead.

Suzuki hit a two-run shot off reliever Jesen Therrien in the seventh. Pinch-hitter Lane Adams had an RBI single to cut it to 6-4.

Franco launched his 16th homer into the second deck in left field in the seventh off Sam Freeman.