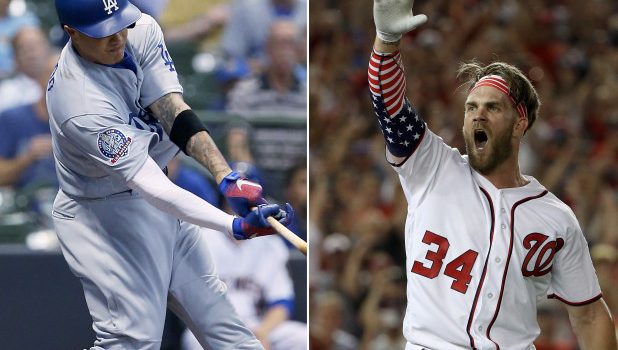 PHILLIES FUTURE ON THE LINE AT MLB MEETINGS STARTING SUNDAY!

That’s their Nation expects after last season’s disappointing ending (80-82) after a 63-48 start.

And then, of course, owner John Middleton said the Phils would be willing to spend “stupid money.”

They’ve been at the center of the rumor mill for just about every key free agent.

The Phillies missed on Patrick Corbin, the market’s top starting pitcher, picked up on Tuesday by the rival Nationals.

That leaves the big two: Bryce Harper and Manny Machado (above).

The team has positioned itself as a potential candidate for both—most likely not both at once, although hey, it’s not impossible. But they’re not waiting for those big chips to fall to begin work.

That move added a strong shortstop, cleared a logjam at first base (creating space for the promising young Rhys Hoskins), and built some bullpen depth.

Heading into Winter Meetings, they’re free to focus on everything else on their list. What could that look like? If they’re really committed to going in all the way in a tough division and spending the money to match, here’s a glance from Sports Illustrated:

The Phillies’ rotation is perfectly capable. Aaron Nola is dazzling, coming off a season that would have easily been worthy of a Cy Young Award in a league without Jacob deGrom.

Jake Arrieta is Jake Arrieta—not quite his former self, but a steady rotation piece. Young Nick Pivetta has shown promise. They were chasing Corbin for a reason, though, and especially now that he’s gone to a division rival, they should keep searching for an upgrade. But there isn’t much elite starting talent among remaining free agents. Instead, a trade might be the team’s best bet to make a splash. The premium option? Cleveland’s Corey Kluber. The ace could take the rotation from fine to frightening, in a pretty logical fit for both teams. Cleveland’s biggest need is an outfielder, and Philadelphia can spare one. Say, Nick Williams, plus a few smaller pieces. (Alternatively: Odubel Herrera, plus a few smaller pieces.) This would also do them the favor of setting up more space for…

It’s all but guaranteed to be the biggest contract in baseball history. And Philadelphia would be better for it. The Phillies would add his generational talent in the outfield, show that they’re serious about contending for the long haul, and, as an added bonus, ensure that he doesn’t end up staying elsewhere in the division by returning to Washington.

The Phillies tried to paper over this hole last year with a deadline deal for Wilson Ramos. But Ramos is a free agent, and the club still needs a quality backstop. (Jorge Alfaro is passable, but likely not enough to stop the team from looking elsewhere.) Yasmani Grandal, perhaps? His value might take a slight hit after his postseason woes, but with elite defense and a serious bat, he’s still easily the top catcher on the market.

Now, this is an area where they could get a little creative. Manager Gabe Kapler has shown an interest in flexible bullpen usage, and Philadelphia could look for a way to build a productive ‘pen around less conventional pieces. Or it could take a more straightforward approach. Scrap last year’s closer-by-committee model. Go for Craig Kimbrel. They’re here to spend money, after all—maybe even be a little bit stupid about it.