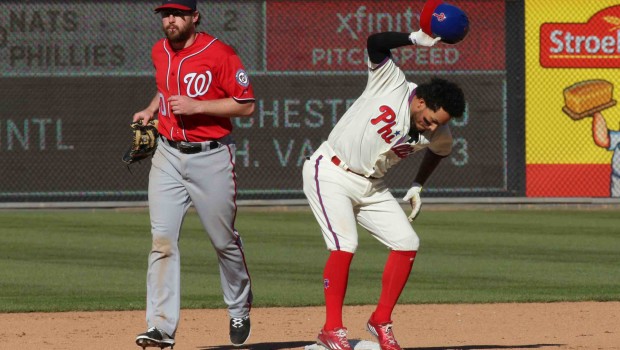 Freddy Galvis is turning into the Phillies’ closer killer.

Galvis hit a two-out double to the left-field wall against Nationals closer Jonathan Papelbon in the 10th inning to score Andres Blanco from second base in the Phillies’ 3-2 walk-off victory at Citizens Bank Park.

Galvis pulled to a stop at second (above) as Blanco crossed home plate. He lifted the helmet from his head, looked toward the Phillies’ dugout and slammed it into the dirt in a moment of celebration. His teammates mobbed him seconds later.

“I was just waiting to see if Jayson Werth could get to that one,” Galvis said. “Thank God he didn’t get it.”

If only Galvis could face Papelbon more frequently.

He is 3-for-3 with one double, one home run, one walk and two RBIs against him since the Phillies traded him to the Nationals last July.

“I played behind him for three years,” Galvis said about Papelbon. “So I know the way he pitches and maybe a little about what the ball does. He’s got the split and the fastball. I know he likes to throw the fastball. I think he threw me four, five fastballs so I was ready for it.”

Galvis hit a 1-2 fastball to left, giving the Phillies their first hit in the leadoff spot since the first inning Wednesday against San Diego. A one-out double from Peter Bourjos, who scored on Blanco’s two-out single to left to tie the game, set up Galvis’ dramatic at-bat.

Papelbon made it clear afterward that blowing the game will not ruin him.

“We’re in first place and we won the [well-fought] series, man. You know?” he said.

Papelbon is 1-2 with a 12.27 ERA and two blown saves in four appearances against the Phillies since they traded him.

“They’re just another team for me,” he said. “I’m going out there trying to do the same [things] I am against any other team. Makes no difference to me.”

The game made a difference for Galvis. It was the third walkoff hit of his career. He had another memorable one May 19, 2013, when he homered against Reds closer Aroldis Chapman.