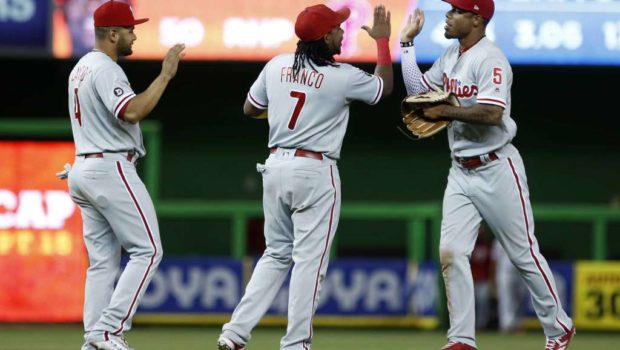 The Miami Marlins blew a ninth-inning lead and were beaten by he Phillies 2-1, who had been shut out for seven innings.

But in the ninth Maikel Franco doubled and advanced on a groundout. Pedro Florimon walked, Jorge Alfaro tied the game with an RBI single, and Andres Blanco’s groundout scored another run.

Giancarlo Stanton, the major league home run leader, went 0 for 2 with two walks and is 1 for 17 this week. The slump comes after he hit 18 homers in August, giving him 51 for the season and briefly moving Miami into the NL wild-card race.

The Marlins totaled four hits, with their final 13 batters retired in order. The losing streak matches their longest of the season, and the past two defeats have come against a team with the worst record in the majors.

Juan Nicasio (3-5), claimed on waivers Thursday, made his Phillies debut and retired Stanton on the tapper to end the eighth.

“I told him we’re not going to pay him — he only threw three pitches to get the win,” manager Pete Mackanin joked.

Hector Neris pitched a perfect ninth for his 18th save in 21 opportunities.